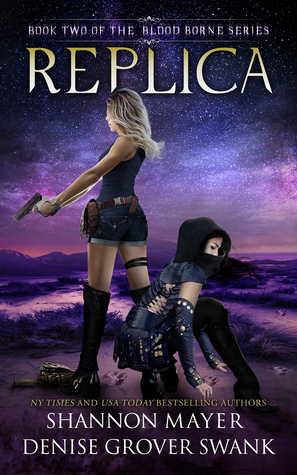 When the sun rises, the nightmares are supposed to fade . . .this time, they don’t.

An expose on the dangerous experiments Rachel and Lea uncovered with the Asclepius project turns the world against them.

Except for a single man who claims he knows about a hidden plan to complete what was started with Asclepius.

Faced with complications they could never have foreseen, and hunted by new and terrifying factions, once more they are in a race against time.

With a new set of clues to decipher.

A werewolf who claims he’s their friend.

This time either the two strong willed women will finally learn to trust one another . . . or end up watching one another die.

The two first person POVs became more well-defined thanks to my increased familiarity with the characters, and the ending of RECOMBINANT wasn’t as far off-base as I’d originally thought which were great comebacks to my initial criticisms of book 1. The multiple “I” writing style is still not my favourite, but the addition of a couple of secondaries helped as did the fact that they were both male because nothing screams distraction like smexy werewolf!

REPLICA was a direct continuation of the story line from the first installment, so it’s definitely crucial that they be read in order. Also, it took me two volumes to nail down whether Lea or Rachel was the MC for a particular chapter—yes, they are labelled; however the transitions were still rather rocky, and when each lead is narrating the same scene except from their own perspective it’s extra confusing, then append two third person POVs to that…

Sambrook blows the lid off supernaturals to the general public via a newscast which should have been an life changing exposé, so I was bummed by how little attention this revelation actually received. Other than a few knee jerk reactions, the authors jumped straight to the main plot without really exploring any of its implications. It made me wonder why they even bothered if it was something that they were just going to sweep under the rug anyway.

I liked Ivan A LOT. He lightened the tension, and provided some much needed testosterone to this estrogen fueled novel. I love strong heroines, but when you have two type-A personalities on the same page it can turn into a catfight. I remain undecided about Antonio, and regrettably the introduction of these bachelors did lead to a of boatload insta lust. Furthermore, Rachel began this journey as human however, as a result of a twist, she’s now a special snowflake too.

REPLICA swapped out THE BLOOD BORNE series’ previous flaws with new ones.