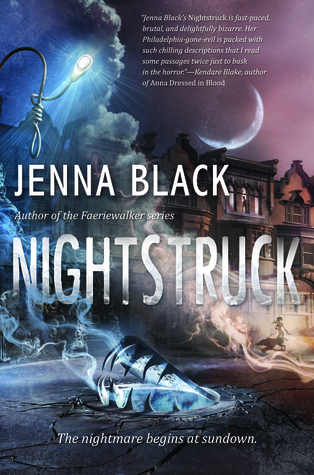 The start of a paranormal horror series from Glimmerglass author Jenna Black.

The night is the enemy, and the city of Philadelphia is its deadliest weapon.

Becket is an ordinary teenage girl, wrestling with the upheaval of her parents' divorce. Her biggest problems to date have been choosing which colleges to apply to, living up to her parents' ambitious expectations of her, and fighting her secret crush on her best friend's boyfriend. That all changes the night she tries to save an innocent life and everything goes horribly wrong.

Becket has been tricked into opening a door between worlds. As dark magic trickles into Philadelphia, strange creatures roam the streets and inanimate objects come to life, all of them bloodthirsty and terrifying. The city returns to normal when the sun rises each morning. The moment the sun sets, most citizens shut themselves in their houses and stay there no matter what they hear.

The magic is openly hostile to most mortals, but there are some it seems to covet, trying to lure them out into the night. While Becket struggles to protect her friends and family from predatory creatures of the night, she is constantly tempted to shrug off her responsibilities and join them.

This is the first book in a new series by Jenna Black. If you’ve read my reviews before, you know I’m not a huge fan of YA books. However, there are a few authors that I will read their YA stories. Jenna Black is one of those authors. I’ve read both her Faeriewalker and Replica series and enjoyed both. So, when given the chance to review this new series, I jumped on the chance. This story is a combination of science fiction and horror and will keep you glued to the pages.

Becket is a pretty normal seventeen year old girl. She is a bit shy. She is also a bit of brainy school girl. She gets great grades and is in all AP classes. She is having to deal with the divorce of her parents. Being that it was her senior year of school, she chose to stay with her father to finish out her school. Both of her parents were self-made and didn’t want to just and her things growing up, so she doesn’t have a car. Her dad is a bit overprotective and won’t let her go to any parties that even might have underage drinking.

Becket’s best friend, Piper, is none of these things. Her parents bought her a car. She shops a ton. She has a packed social schedule. She has grades that are good enough, but not great. But, she has been there for Becket, especially when Becket needed her during the divorce. Piper is also dating Becket’s crush and neighbor, Luke. Not Piper’s fault, since Becket never mentioned that she had the crush, but this is hard for Becket.

Anyway, one night when Becket is walking the family dog, Bob Barker (yep, that’s his name), they come across a crying baby. But something doesn’t feel right. Bob is a trained police dog, though he wasn’t a police dog, just a pet and protector of the family. Bob doesn’t like this “baby”, but Becket can’t in good conscience leave a baby, so she goes to investigate. Then she sees something that she shouldn’t.

After that, things in Philadelphia start to get strange after that. People start to get more violent. People are calling 911 for weird things, but can’t seem substantiate anything. People are disappearing. Becket is even starting to see things that she shouldn’t. Piper starts acting way different from the Piper that Becket knows. Every night seems to be worse than the previous night.

This book does tackle a few things that teenagers will have to deal with like peer pressure as the more evil Piper talks Becket into doing some things that she wouldn’t normally do. There is even a scene where Piper, Becket and Luke sneak into a bar. Did I mention that they were still in high school? Piper starts drinking and drinks way too much. There is a great discussion between Luke and Becket about not letting Piper drive in her condition. I love how the Ms. Black tackles this issue without making seem like she is trying to give out “the moral of the story here is” type of feeling.

This is a great story that really kept me glued to the pages. I just couldn’t believe everything that was happening and wanted to know what was going to happen next. I don’t know the official subgenre this book is supposed to go into. I would include it as a dark science fiction or a horror story. All I can say that it is good. I will say that not everyone has a happy ending, but that is not an uncommon theme in Jenna Black books. She doesn’t write books that are all hearts and rainbows. People in her books will die and stay dead. The series isn’t over, so I don’t know what will happen in the overall end. I will say that I will be looking out for when the next book comes out.