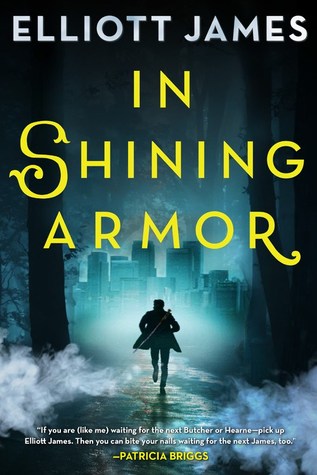 This fairy godmother's got claws.

When someone kidnaps the last surviving descendant of the Grandmaster of the Knights Templar, it's bad news. When the baby is the key to the tenuous alliance between a large werewolf pack and the knights, it's even worse news. They're at each other's throats before they've even begun to look for baby Constance.

But whoever kidnapped Constance didn't count on one thing: she's also the goddaughter of John Charming. Modern-day descendant of a long line of famous dragon slayers, witch finders, and wrong righters. John may not have any experience being a parent, but someone is about to find out that he can be one mean mother...

As a whole, this series has been a fun read; the hero is charismatic, Elliott James is a fellow geek, and there’s werewolves. Those points aside, I’m at a loss at to what the underlying story arc is that ties the four books together other than the animosity between the Knights Templar and the pack which in and of itself isn’t a big enough driving force IMO. I like that each installment can stand on its own, but I’m a big picture kind of girl, and I just don’t see what John Charming’s end game is.

I’ve found that these novels have gotten progressively less humorous which makes me sad because the author’s writing style was one of the first elements that ensnared me. This volume still had its moments, however they were few and far between when compared to CHARMING. The chapter titles were probably the most entertaining aspect with my favourite being #20: “So, we weren’t dead. We were just in Canada.” I appreciated the shout out, and the Anne of Green Gables reference, although the author made a mistake—the iconic L.M. Montgomery heroine is from PEI not Nova Scotia.

The plot surrounding Constance, John’s goddaughter, led us on a merry chase. The world was expanded upon quite a bit with a bunch of different supernatural types being brought into the light, and a trip to another dimension. The circumstances were comparable to one of the protagonist’s previous missions that went down in 1965, so the flashback to a younger Charming was also a perk. And, I have to give props to James for his villains because each one has been bigger, badder, and creepier than the last, and this latest batch was the stuff of horror films.

The romance between the lead and Sig seems to have found its sweet spot which I couldn’t be happier about because it was touch and go there for a while. I enjoy their lively banter, and how they both have their strengths and weaknesses, but that as a couple they are on even ground. I wish that this series had a more regular cast of secondary characters though considering that only John and the Valkyrie seem to appear on a continual basis. As much as I love them, it takes more than two leads to carry a book as well as a seemingly aimless overarching story.

IN SHINING ARMOR was another straight-shooting Urban Fantasy tale by Elliott James.