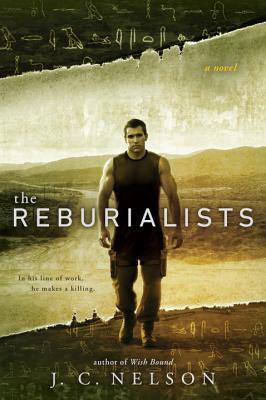 The author of Wish Bound and the Grimm Agency novels returns with an all-new urban fantasy novel!

Burying the dead is easy. Keeping them down is difficult.

At the Bureau of Special Investigations, agents encounter all sorts of paranormal evils. So for Agent Brynner Carson, driving a stake through a rampaging three-week-old corpse is par for the course. Except this cadaver is different. It’s talking—and it has a message about his father, Heinrich.

The reanimated stiff delivers an ultimatum written in bloody hieroglyphics, and BSI Senior Analyst Grace Roberts is called in to translate. It seems that Heinrich Carson stole the heart of Ra-Ame, the long-dead god of the Re-Animus. She wants it back. The only problem is Heinrich took the secret of its location to his grave.

With the arrival of Ra-Ame looming and her undead army wreaking havoc, Brynner and Grace must race to find the key to stopping her. It’s a race they can’t afford to lose, but then again, it’s just another day on the job . . .


I’m going to keep this one short and simple. A couple years ago, I tried to read the first installment of Nelson’s GRIMM AGENCY series, Free Agent. It did not go well:

“She didn’t look like a princess. She looked like a college intern for a radio station. Five foot three, strawberry blonde, and a complexion that could sure as hell use work. Plus she was packing the freshman five on her hips, along with the sophomore seven on her thighs and, well, you get the idea.”

My best friend in high school was a ballerina, and to this day I’m pretty sure she still struggles with bulimia. Insensitive statements like that one could send her spiraling down another another binge-and-purge cycle.

I’m a strong believer in second chances, so when a copy of THE REBURIALISTS fell in my lap, I decided to give it a go. It went about as well as the last time:

Beneath me, my date from last night’s champagne ball cursed in Greek. The only part I understood for certain was my name, Brynner, and that her name was most definitely not Athena. Athena would be her sister, my date from the night before.

But it didn’t stop there: 1. *throws head back and shrieks with RAGE*

2. You know how much fun it is to watch rogue-like characters on screen? Han Solo, Captain Kirk, Harvey Spector, etc.?

It’s significantly less fun to share headspace with one.

It’d be so much easier if they didn’t, right? Don’t hate the player, hate the game? Or some such nonsense.

And so, I think it’s best if Mr. Nelson and I permanently part ways. That doesn’t mean you shouldn’t try him on. I seem to be a minority in my fury over his callous remarks about female imperfection and stereotyping women as jealous shrews, but, hey, one woman’s insults are another’s oh-so-funneh jokes. I leave it in your hands to decide on which side of the fence you fall. #nojudgement

7 responses to “DNF Review: The Reburialists by J.C. Nelson”