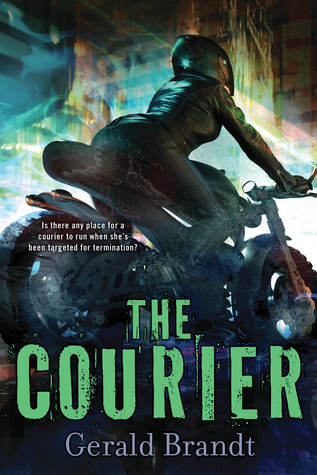 Kris Ballard is a motorcycle courier. A nobody. Level 2 trash in a multi-level city that stretches from San Francisco to the Mexican border, where corporations make all the rules. A runaway since the age of 14, Kris struggled to set up her life, barely scraping by, working hard to make it without anyone’s help. Witnessing the murder of one of her clients changes everything. Now she’s stuck with a mysterious package that everyone seems to want.

Now the corporations want Kris gone, and are willing to go to almost any length to make it happen. Hunted, scared, and alone, she retreats to the only place she knows she can hide: the Level 1 streets. Running from people that seem to know her every move, she is rescued by Miller—a member of an underground resistance group—only to be pulled deeper into a world she doesn’t understand. They work together to stay ahead of the corporate killers, until Miller falls into their hands. Kris realizes being alone isn’t the answer, and she’s willing to do anything to get him back.

The world of THE COURIER is a future dystopian version of a combined San Francisco and Los Angeles (I think), where space is presumably at a premium, b/c people are building up instead of out.

Our MC (Kris) is a courier—she delivers packages on a motorcycle while wearing kick-ass, high tech riding gear—in this brave new world, where an informal caste system based on seven complete and separate levels of the city determines an individual’s quality of life (melodrama included for later reference):

People that worked or lived on Level 1, which used to be open air and grass and trees, had the sense to stay out of any water that managed to drip its way down there. Rumor had it the stuff could kill you in three days if it touched your skin. I used to live in that hellhole, so I knew different. I even got desperate enough to drink it once, when I ran away from home. I had peeled the moss off an old brick wall, hoping it would act like a filter, my hands shaking from hunger and thirst, and squeezed the lifesaving fluid from it. It must have worked; I’m still here. Maybe I just got lucky. It didn’t matter. I was never going back there.

But despite moving up a level and getting a decent job, it didn’t take long to figure out things were about to turn nasty for Kris:

“It’s just a short run, a pickup on Level 4 and a delivery on Level 2. You can take the paperwork home with you, honey, and drop it on my desk in the morning.”
I just stared at her. Having Dispatch let you take the paperwork home with you was like being plucked off the street and taught how to fly a shuttle to and from the Sat Cities. Shit like that didn’t happen . . .

Initially, I was intrigued, but it took about two seconds for me to become disgusted with Kris’s bad attitude and double standards. I can’t recall a more negative or obnoxiously self-pitying character. I’m not saying she hadn’t had a hard life, that her cynical outlook wasn’t warranted—all the best characters have survived any number of Bad Things and/or overcome adversity.

They don’t waste time feeling sorry for themselves or on melodramatic remembrances. They don’t bitch and moan about every, single minuscule aspect of their existence. B/c poor, poor Kris is a low level and not a priority.

Nothing is ever pleasant for poor, poor Kris. Almost is as good as it gets.

3. People would be out doing whatever it was with all their cash.

4. Something about congestion and pollution and death tolls.

And that, my friends, was just one page.

Worse than that, she’s all talk:

“I’ve been waiting forever. What, did you decide to walk all the way here? And why did you take the wall? The aisles are way faster.”
Aww, hell. Why did he have to be an asshole as well as a freak? I took a deep breath and held my tongue for the second time in the last few minutes. There was no point in getting reported and having Dispatch even more upset with me. All this for a few extra bucks? I should have just gone home.

That was her second “should’ve just gone home” inner monologue (the first was when she took the last minute delivery), but she was too scared of Dispatch to do anything besides rant internally.

ALSO, she likes to name-call, but, again, never out loud. *flares nostrils*

Beyond my hatred of the main character, the writing was . . . pretty awful.

The chapters were short and choppy. As soon as I acclimated to one POV, it would change to another, often covering the same time period. The shifts were abrupt and sometimes confusing, especially when I would find myself in the mind of a psychopath.

I probably could have eventually adjusted to the POV changes, but the weird fixation and the various and redundant use of “gut” pushed me over the edge.

The third time Kris felt her gut clench (at only 8% into the book), I did a word search and discovered it was actually only the second time. The first mention of her gut had to do with it burning. My bad. Beyond those first three, there were EIGHT more:

There were also four “gutted” men, “years of built up fish guts,” one head driven into someone else’s gut, one gun pointed at a gut, and one assumption that “Quincey would probably just gut him.” <——I’d take that bet.

And I’m done. THE COURIER by Gerald Brandt was not for me. I’m a character-driven reader, so hating the main character would’ve been insurmountable by itself—my dislike of the writing was bonus. Ugh, ugh, ugh. Not recommended.

10 responses to “DNF Review: The Courier by Gerald Brandt”