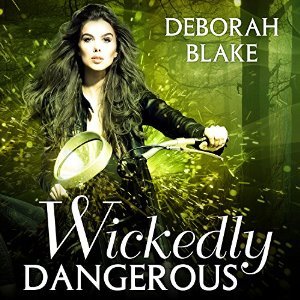 Known as the wicked witch of Russian fairy tales, Baba Yaga is not one woman, but rather a title carried by a chosen few. They keep the balance of nature and guard the borders of our world, but don’t make the mistake of crossing one of them…

Older than she looks and powerful beyond measure, Barbara Yager no longer has much in common with the mortal life she left behind long ago. Posing as an herbalist and researcher, she travels the country with her faithful (mostly) dragon-turned-dog in an enchanted Airstream, fulfilling her duties as a Baba Yaga and avoiding any possibility of human attachment.

But when she is summoned to find a missing child, Barbara suddenly finds herself caught up in a web of deceit and an unexpected attraction to the charming but frustrating Sheriff Liam McClellan.

Now, as Barbara fights both human enemies and Otherworld creatures to save the lives of three innocent children, she discovers that her most difficult battle may be with her own heart…


The Baba Yaga. Russian fairy tale? Yes, but in these books, she’s just one of several that exist in the world, being called on by believers to help in solving a major problem or mystery. This is my first book by Deborah Blake, and after reading(listening to) this, it won’t be my last.

Liam is a small town sheriff in upstate New York. He is busily trying to find several lost children from his area, and under the gun to lose his job if progress isn’t made soon. He’s living on little to no sleep, when he sees an airstream mobile home and truck parked on a rural road outside of his town. When he checks it out, he meets Barbara Yager, also known as Baba. She’s Russian, pretty close to being all out beautiful, and is as mysterious as the day is long. He’s pretty much in awe of her from the start. But he also knows that she’s the only thing new around there and he has to investigate. On Baba’s part, she has been called on by one of Liam’s sheriff deputy’s mother, because the deputy’s child is one of the lost. It’s not long before the two are working together to try and find the children. It’s also not long before Liam realizes that Baba is not normal in any sense of the word.

Baba was ingeniously written by Blake, at least I thought so. Definitely my first for a heroine of this type. She may look twenty five, but she’s already past eighty, she’s magical, rides a motorcycle, and guards the gate to the underworld in the closet of her mobile home. Her dog is actually a dragon in his other form, and oh yes, he talks! And he is funny. Together they guard the water of life in her refrigerator. It’s what keeps them both young, and also heals them when injured. I mustn’t forget to mention that her home is enchanted, seemingly with a mind of its own at times. Just for fun, it hides the doors when company comes, and has other tricks up it’s sleeve as well. Liam was fun as the good looking, but flummoxed sheriff, one that has no idea what he’s stumbled onto after meeting Baba. But he likes her, and still likes her even when the town’s people begin to grow suspicious of her. There’s also a group of biker dragons that help Baba out at times and they too offered some of the comic relief, as well as muscle.

I am not going to discuss more about the actual mystery as I think the reader should find that out on their own. I will say that this book harbors a truly horrible villain, and some lesser ones as well. Visits to the underworld were intricately described, as were the many denizens that reside there. There is a satisfying romance as well.

As for the narration, I actually enjoyed it in the end. I say that because when I first heard the Russian accent that Romy Nordinger uses for Baba, I really wasn’t sure I was going to like listening. But after awhile it didn’t bother me at all, and actually helped distinguish Baba from the other characters, so there was no mix ups on who was talking. I would definitely listen to anything else Nordinger narrates.

This was actually a fun read, with a good romance and characters, combined with fantastic world building and mystery. I thought it was pretty unique as well-always a good thing! I recommend it to adult paranormal romance readers, and even some urban fantasy fans might enjoy it as well.