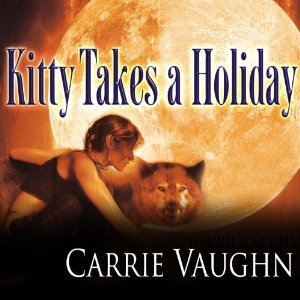 After getting caught turning wolf on national television, Kitty retreats to a mountain cabin to recover and write her memoirs. But this is Kitty, so trouble is never far behind, and instead of Walden Pond, she gets Evil Dead.

When werewolf hunter Cormac shows up with an injured Ben O'Farrell, Kitty's lawyer, slung over his shoulder, and a wolf-like creature with glowing red eyes starts sniffing around the cabin, Kitty wonders if any of them will get out of these woods alive.

Every hard hitting Urban Fantasy heroine deserves some down time, but Norville hasn’t exactly done enough to warrant an extended stay at a mountain cabin in my opinion, and she definitely hasn’t reached memoirs status yet. KITTY TAKES A HOLIDAY is only installment #3 after all. Carrie Vaughn attempted to fast track this series, and the later chapters came close to accomplishing that; however the fact remains that too much of this audiobook was about the protagonist throwing a pity party in the boonies, screwing up her love life, and not hosting her radio show.

I enjoyed the mystery of who (or what) was leaving dead animals around Norville’s rented digs, and Cormac’s subsequent trial for killing the threat in front of a cop was a close second because it lead to more knowledge about the sexy bounty hunter. Ben surprised me once again! He’s progressed from lawyer, to vampire slayer, to his current condition, and although I was taken off guard by a recent development, I am impressed with how his character is shaping up. Unfortunately, the pacing, and long stretches of inaction stole a lot of the plot’s thunder.

So, let’s recap, Kitty has 1. come out as a werewolf on air, and 2. shifted on live television. That’s a lot for anyone to endure, especially within a matter of weeks. That being said, she’s the only MC that I’ve come across who’s written an autobiography, and quite frankly she’s also the least deserving. Norville began her journey as a submissive, and has made a sliver’s worth of progress on that front, but in this novel she lost ground. There were too many why-me moments, and her jabs at Ariel, Priestess of the Nigh, were petty. I missed listening to the Midnight Hour!

Marguerite Gavin’s performances have been middle-of-the-pack thus far, but she clearly has more talent than the voice inside my head because originally I quit reading this series after two books. She really excels at the radio bits which were MIA in this particular volume, so that was unlucky, and the accents she used for the various members of the Wilson family didn’t quite hit their mark. Aside from those cons, Gavin remains one of the lead reasons why I haven’t abandoned KITTY NORVILLE (again). However, her narration was no substitute for Vaughn’s uninspired writing.

I need a vacation from snoozeville after KITTY TAKES A HOLIDAY.