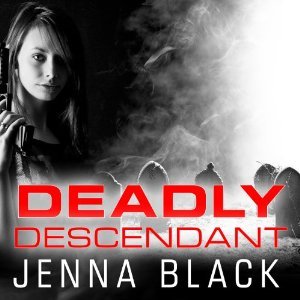 An ancient evil is unleashed in the modern world— unless one fearless P.I. can hunt it down. . . . Nikki Glass, Immortal Huntress, returns in this new novel in the acclaimed series by Jenna Black.

As a living descendant of Artemis the Huntress, private investigator Nikki Glass knows how to track someone down. But when an Oracle shows up, warning the descendants about wild dog attacks in Washington D.C., Nikki is afraid it might be a trap. The Olympians believe the “dogs” are jackals, controlled by a blood-crazed descendant of the Egyptian death-god Anubis. Whatever. . . . If Nikki hopes to muzzle Dogboy, she’s got to catch him in the act. But when she stakes out a local cemetery, she ends up face-to-snout with a snarling pack of shadow-jackals whose bite is worse than their bark. These hellhounds are deadly—even for an immortal like Nikki. “Dog” spelled backwards may be “god,” but that won’t stop Nikki from teaching these old gods some new tricks. Like playing dead.

This is the second book in the Nikki Glass series. Nikki is starting to get a handle on new powers. Not completely, but she has come to terms with her new life. Though, she isn’t completely ready to give up her old life. She still has her old condo. She wants to keep her PI business, though that is getting harder and harder.

The Olympians have come to Anderson because they are aware of a descendant that is killing people using a group of dogs. They need Nikki’s special power to help track this guy down. Being that this guy is a descendant of Anubis, the problem is how to kill him. Evidently, his seed is cursed and causes everyone who takes it in to go crazy, which is why the Olympians didn’t want to soil one of their Greek descendants with this seed. Problem is now, they have it in a death god descendant. They are hard to contain, which is something we learned in the first book with Jamaal, who can walk through walls. The question is what to do with him after he is caught.

This is another great addition to the series. Nikki does her PI thing while learning a lot more about her powers. We learn more about the Olympians and even meet their oracle. The part of the story that I enjoyed the most, was learn more about Jamaal. There is a lot that he hasn’t shared with Anderson’s people that he shares with Nikki. Like the fact that he is much older than he lets on. Like the fact that he was a slave, which is why no one ever sees him without a shirt, lots of whip marks. I loved seeing this softer side of Jamaal. I really enjoyed seeing their romance grow, though it is still at a snail’s pace.

This series is such a fun series with such a unique premise of the descendants of gods that are mostly immortal. The characters are wonderfully developed and the best part of the story, in my personal opinion. There is also some politics that are at play and some shades of gray on who are the good guys and who are the bad guys. The suspense as Nikki tries to track down the bad guy, not to mention the tension between her and Anderson’s crazy wife adds to the story. If you haven’t tried this exciting Urban Fantasy series, I highly recommend it. I believe that the fourth and final book will out in May, though I don’t know if it will be available on audio. I would love it if it were.

Narration
Sophie Eastlake did another phenomenal job with the narration of this book. If you never listened to Ms. Eastlake, I highly recommend her narrations. She does a great job with her pacing and tone. Her range of voices for both male and females are wonderful. She is able to make Anderson sound as menacing as he should, while still being one of the “good guys”. She also does a great job with crazy Emma. I think it takes talent to voice a crazy person and she seems to do it with easy.