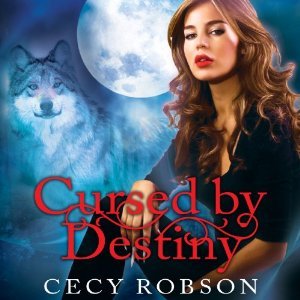 Celia’s a girl in trouble. Her heart is bound to Aric, but he is a pureblood were who must deny her or risk condemning his species to extinction. And that’s just her love life. She’s also been called to take down a group of demon terrorists looking to overthrow the paranormal world. (No pressure.)

In order to bring them down, Celia must ally herself to Misha, the master vampire who has made no secret of his desire for her.

And if that weren’t enough misfortune for one girl, a clairvoyant’s prediction could destroy Celia and Aric’s love for good. The only way to protect the world from unbridled supernatural terrorism is for Celia to bind herself to her destined mate. And that doesn’t appear to be Aric…

The WEIRD GIRLS series appears to be moving further away from Urban Fantasy territory, and more into the Paranormal Romance zone with every installment. Celia & Aric’s romance has taken center stage, and the amount of action is on the decline. Now, that’s not necessarily a bad thing, just not what I expected when I originally picked up the first book. I also spent a significant amount of time thinking that I’d imagined a major twist only to stop mid-listen to read A CURSED MOON, and realize that yes, the novella is a must.

The primary culprit that’s prevented me from giving any of Cecy Robson’s novels a 5-star rating remains the on-again-off-again relationship between the protagonist and her mate. It’s been dragging on for three volumes, and although the couple does make a bit of headway in this latest addition, I strongly suspect that the drama is far from over. I enjoyed delving deeper into Aric’s side of the issue, and Celia’s maturity level with regards to her love life has come a long way, but there is still much work to be done.

The romance-centric plot also halted the Alliance / Tribe thread in its tracks to a certain extent. The pacing was much slower, I’d even go so far as to say that it dragged, and I finished this installment feeling like not a whole heck of a lot happened. The oldest Wird sister fine tuned her skills under Misha’s tutelage, and the other three siblings definitely helped to liven things up, but a key event being slipped into a novella is a personal pet peeve of mine, and I’m still not 100% sure how I feel about the ending.

I plan on checking out other titles that were narrated by Renée Chambliss because she has a nice range of character voices considering that these ones required two versions on account of their human and beast halves, and although the angst wasn’t my cup of tea, I thought that she expressed the on-page emotions wonderfully. I also think that the writing held her back a little, especially in this particular audiobook, and am curious to see what she’s capable of under different circumstances.

CURSED BY DESTINY was the lemon of the WEIRD GIRLS series.

5 responses to “Audiobook Review: Cursed by Destiny by Cecy Robson”