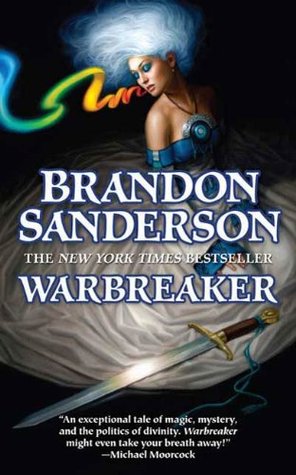 After bursting onto the fantasy scene with his acclaimed debut novel, Elantris, and following up with his blockbuster Mistborn trilogy, Brandon Sanderson proves again that he is today’s leading master of what Tolkien called “secondary creation,” the invention of whole worlds, complete with magics and myths all their own.

Warbreaker is the story of two sisters, who happen to be princesses, the God King one of them has to marry, the lesser god who doesn’t like his job, and the immortal who’s still trying to undo the mistakes he made hundreds of years ago.

Their world is one in which those who die in glory return as gods to live confined to a pantheon in Hallandren’s capital city and where a power known as BioChromatic magic is based on an essence known as breath that can only be collected one unit at a time from individual people.

By using breath and drawing upon the color in everyday objects, all manner of miracles and mischief can be accomplished. It will take considerable quantities of each to resolve all the challenges facing Vivenna and Siri, princesses of Idris; Susebron the God King; Lightsong, reluctant god of bravery, and mysterious Vasher, the Warbreaker.

I’m simultaneously impressed and infuriated by this occurrence.

It’s not that I consider myself to be exceptionally smart so that nothing ever gets by me, or that I’m super sneaky and thus able to suss out super sneakiness in others, but you know how it is: when you’ve read enough books, you become cynical.

If a character does even a single eyebrow-raising thing, you’ve got their number. Anything that qualifies as “questionable” behavior a suspect makes.

Take that well-developed cynicism and combine it with my OCD detail-orientedness, and, well . . . it’s not often that I don’t at least speculate when something’s amiss.

View Spoiler »In hindsight, I feel like an idiot. The only thing keeping me from throwing myself off a cliff b/c SHAME is that so far (and don’t you dare be the first) no one else saw it coming either. I told someone in a comment on one of my status updates that I felt like that Stupid Girl who thinks she can change the mind of Bad Boy who tells her up front that he’s not interested in a relationship.

B/c THEY TOLD US.

And the WHOLE TIME I’m sitting there chuckling, thinking, “Those guys . . . sooooo funneh.”

Not funny. Not funny at ALL. « Hide Spoiler

This world is another brand new concept to me, based on color, and, honestly, it probably wouldn’t have worked if it wasn’t so easy to visualize (b/c not a visual person).

I don’t have a movie playing in my head as I’m reading a book.

I have vague to not-so-vague impressions of what things and people look like, but unless a description is so detailed that I associate it with something else I’ve already seen, I don’t develop a clear picture. And maybe that’s exactly what was going on here (The Wizard of Oz, anyone?), but, regardless, it was easy to imagine, so it did work.

The basic idea revolves around a magic system fueled by soul energy (sort of . . . maybe . . . ). Only it’s called Breath. The more Breaths you have, the more colorful the world around you becomes and the more magic (animating) you can perform. A person whose Breath has been stolen/taken/given up willingly is called a Drab. They’re alive, but they’ve lost some essential spark.

It’s quite hideous, actually . . . but strangely compelling all the same.

Sanderson does this thing . . . he gives you a character (or three) that you don’t like—I don’t think you’re even supposed to like them—and then he grows them. Slowly. Painfully. By the end, even if you still don’t like them, you have respect for their journey, and you see how you could like them once they’ve weathered life’s storm of reality checks. These characters are always young adults, so the forging process is entirely believable.

This sort of thing doesn’t work for me outside of fantasy, b/c not enough book. Here though . . . there are plenty of other characters you do like to take the heat off the ones you have to patient with.

I like it. It adds depth and makes the scenario—fantastical as it is—more credible.

I’m not going to say anything about specific characters, b/c I don’t think I can without launching a rant (b/c tricked and/or heartbroken). Just believe me with I say that they are wonderful and easy to connect with. *rants* *sobs* *glowers* *wails*

This is going to be short, not b/c it wasn’t compelling, but b/c the plot points are simple and effective: arranged marriage to unify two nations on the brink of war.

It does not go as planned.

Conjecture: View Spoiler »I think Clod the Lifeless (HA!) is really Arsteel. I think his pseudo-sentience can be explained by being a Returned who was turned into a Lifeless. It would also explain Vasher’s strange response to Vivenna when she mentioned that Denth and co. had a Lifeless. « Hide Spoiler

This is only my second Sanderson read, but in addition to the character(s)-you-don’t-like, other patterns are also emerging.

I like this, too. It makes me feel like I understand the author and his story-telling process, so when he does one of those things that are typical of him, I can sit back and say, “That Sanderson . . . ha ha, ho ho . . . look at him doing that thing he does,” b/c it feels like I know him.

1. SURPRISE Bad Guy
2. Last 10% that might literally kill you (b/c heart attack).
3. HERO. As in true Hero to inspire epic poetry, b/c gloriously selfless and loyal and ALL THE THINGS that a Hero is supposed to be.

There are probably others, but I haven’t picked up on them yet, b/c Sanderson noob. BUT. Believe me, I will keep you posted, and WARBREAKER is a must read, regardless of where you happen to be on your journey through the Cosmere. Highly recommended.