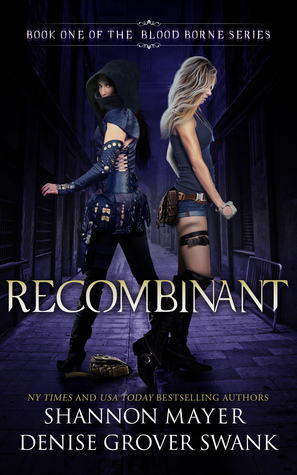 In the city that never sleeps, nightmares live in the darkness . . .

A series of grisly murders begin to pile up in New York City, murders that have no rhyme or reason and no leads. Unless one chooses to believe that the supernatural is possible.

The crimes have caught the attention of two very different women. A journalist fresh off the plane from covering the war in Iraq and a vampire who has chosen to hunt her own kind. Together they will form a reluctant yet unrelenting team.

As they slowly begin to crack the fissures behind a government cover up and bioterrorism, they find a truth that neither of them could ever have suspected. And now it's too late for either of them to turn away.

Even if it means their lives as they know them will never be the same.


Being very familiar with Shannon Mayer’s work, but not at all with Denise Grove Swank’s, I knew that my feelings vis-à-vis the two protagonists and writing styles could potentially be divided. The premise of RECOMBINANT suited my tastes completely with its iron fueled heroines—a vampire turned Cazador and a ballsy reporter—and action driven plot; however multiple POVs have a tendency to get messy, and that’s precisely what happened in this first installment.

I enjoyed both of the leads separately, and witnessing their developing partnership. Lea’s right-hand-man, Calvin, was also a plus. The characters’ backstories were explored in sufficient detail which allowed readers to get a good sense of what drives them, although switching back and forth did make it difficult to get a cohesive picture. That point aside, I thought that they interacted well together, and saw definite promise for them as a baddie fighting team.

For me, government conspiracies come in at the bottom of the pile as far as Urban Fantasy threads go. They are just so commonplace that it’s impossible for an author to come up with an adequately overhauled version to get me fully engaged. I hope that it was a one-off, and that this won’t end up being the primary arc of this series. In addition, the ex-boyfriend tangent as well as the unrequited love one were two utterly unoriginal tropes that further contributed to this novel’s run-of-the-mill-ness.

This title is written in alternating first person narratives, and because both protagonists were new to me, it was sometimes hard to pinpoint which “I” was currently at the helm. Mayer and Swank’s styles were quite different which helped a bit with the former, but caused a number of inconsistencies, and on occasion made a scene cut-out mid-idea to make way for the other heroine’s take. I also didn’t get why Lea & Rachel split in the final pages.

There were too many I’s and not enough We’s in RECOMBINANT.