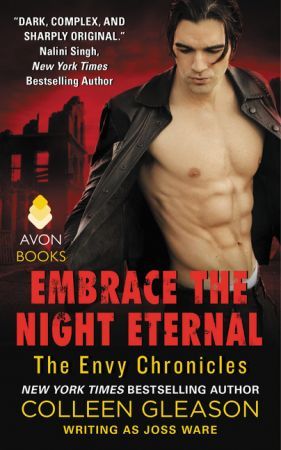 Everything they knew is gone.
From the raging fires, five men emerge with extraordinary new powers. They must learn how to survive this dark, ravaged world . . . but they cannot do it alone.

Simon Japp will never forget his violent past. But when civilization is all but destroyed, he sees his chance for redemption. Blessed with a strange "gift," he's determined to help the resistance against the Strangers, the mysterious force that stalks them at every turn. He can't afford to get distracted, even by the stunning, soft-spoken woman fighting by his side . . .

Sage Corrigan has learned to be careful where she places her trust. But she sees something good in Simon, even if he can't see it in himself. Posing as lovers to infiltrate a group key to their fight, they find that their staged affection soon develops into a desire that will leave them fighting for their lives in the night eternal . . .

Dystopian books and I have finally clicked and I have been reading lots of them lately. This one by Colleen Gleason, writing as Joss Ware, was the second in this series about a small group of men that get sealed in a cave in 2010 and wake up fifty years later. The world they knew is gone and in it’s place is a world that was devastated by earthquakes, tornadoes, high winds, and it all culminated with most of the population dying. The group found their way to Envy in the previous installment. Envy was once called NV for New Vegas, as in Las Vegas, and now it’s become known as Envy. The inhabitants mostly live in one of the high rise hotels, one of the few that survived mostly unscathed. Now it’s sitting pretty close to the Pacific Ocean, since the far western part of the United States is now gone. Even the weather has changed and Nevada is now tropical. World building is close to being the most important element in this book, as much as it was in the first installment, however, the romance is still center stage.

While the world building is beautifully done by the author, as before, my favorite was the romance and characters. Simon was once a lethal henchman for a powerful crime boss, and was on the run from him when he entered the cave in 2010. He hated himself, and what he had become, and the drugs he used to just get by. Now is his chance to reinvent himself-if he can get past how horrible of a man he was in the past. Sage is a super smart, tech savvy, beautiful young woman who is working to get an underground internet installed in the area, along with her best friend, Theo, and his brother, Lou. It has to be underground because of the Strangers- people that are immortal and have a crystal embedded in their upper chests. They have power, nice cars that actually run, and live in huge homes away from Envy. Theo and his brother Lou also have an extremely interesting back story. To make things even more interesting, Theo is in love with Sage, and not about to let some new guy(Simon)steal her away from him. Not that Sage is his either.

The main character in the previous installment, survived with the gift of healing. Simon has his own new ability, one that he’s not telling anyone about-so I am not telling it either-except to say, it’s one of the best super powers ever! It’s very much needed for this group that are working underground against the Strangers. It’s good versus evil in this new world. And I haven’t even mentioned the zombies!

If you haven’t discovered Colleen Gleason’s work yet, you should really check her books out. I have enjoyed every book I have read by her. They are filled with action,life and death moments, and more importantly, romance. Thankfully, she has quite a large body of work so I will definitely be continuing on with more of her work in the future. I highly recommend this series to adult paranormal romance fans, and even urban fantasy readers will find something to like about this series. Fantastic read!