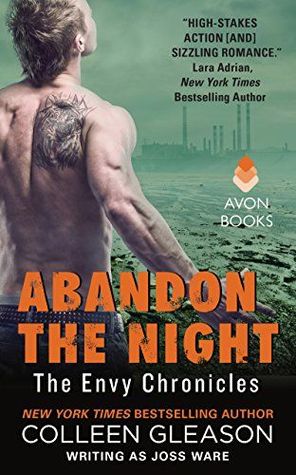 From the raging fires, five men emerge with extraordinary new powers. They are humankind's last hope . . . but they cannot survive this dark,
ravaged world alone . . .

Quentin Fielding had everything. Money. Power. Women. But now that civilization is all but annihilated, Quent wants only one thing: revenge. Harnessing a strange new "gift," he embarks on a deadly mission to find the man responsible for the chaos and destruction, the man he should have killed years ago: his father. Only one thing stands in his way--a mysterious, arrow-wielding beauty . . .

Zoe Kapoor is on her own quest for vengeance, searching for the monstrous fiends who murdered her family. Soon she and Quent join together, journeying through the ruins of the world they once knew as a desperate desire builds between them. Drawing closer to an enemy they never imagined, Zoe and Quent must abandon all fear, abandon all regret, abandon the night . . .

The world as we know it is gone, along with most of the people. Envy, once Las Vegas, is now the only large settlement in the area. By large, I mean probably three hundred people or less. It’s been fifty years since the Change, and very little in the way of progress has happened, and that’s because a group of “Strangers” that wear crystals in their skin are pretty much in charge now-but not so much in Envy. Envy houses the secret resistance movement and when the group of men featured in these books arrived from Sedona weeks before, they were quickly recruited to the efforts.

When Quent first traveled to Envy, it wasn’t long before he was rescued by a beautiful woman after being attacked by huge zombies known as Gangas. Zoe is very mysterious to him, and spends her time hunting and killing Gangas. She’s been on her own since her entire family was killed by Gangas, when she was just fifteen. Now ten years later, she is a skilled hunter and very lethal with a bow and arrow. She doesn’t need anyone else, or so she thinks. She wasn’t counting on meeting someone like Quent. Quent was a billionaire playboy before the change, with no skills; now he is trying to find his place in this new world. He too, has a special new ability since waking up in the cave in Sedona, otherwise unchanged, after losing fifty years of his life. Zoe keeps appearing in his life, usually by sneaking into his room. The chemistry of the two is palpable throughout their encounters. Quent wants her to stay but Zoe won’t. This installment is what happens when the two decide to travel together for a mutual quest.

I am having the best time reading these books. Now three books in, the world building continues to develop, and it’s all pretty fascinating. This author is rapidly become a favorite for me, as her books are always well written, premises intricately orchestrated, romances hot, with characters that are both real and flawed. Her villains are truly bad, with nefarious reasons for all their actions. The books are all adventures, with suspense peppered with life and death moments. It all surrounds a wonderful romance, and with this book, the author has outdone herself in that respect, as this one was my favorite, so far. I loved everything about Zoe and her back story and Quent and his equally fascinating back story. Their story together was riveting for me, as the two find the first real love of their lives.

I highly recommend this book and series to paranormal romance fans, as well as dystopian readers. Science fiction fans might really like these, as well.