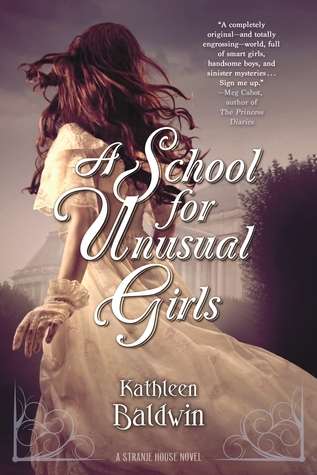 A School for Unusual Girls is the first installment in the Stranje House series for young adults by award-winning author Kathleen Baldwin.

It’s 1814. Napoleon is exiled on Elba. Europe is in shambles. Britain is at war on four fronts. And Stranje House, a School for Unusual Girls, has become one of Regency England’s dark little secrets. The daughters of the beau monde who don’t fit high society’s constrictive mold are banished to Stranje House to be reformed into marriageable young ladies. Or so their parents think. In truth, Headmistress Emma Stranje, the original unusual girl, has plans for the young ladies—plans that entangle the girls in the dangerous world of spies, diplomacy, and war.

After accidentally setting her father’s stables on fire while performing a scientific experiment, Miss Georgiana Fitzwilliam is sent to Stranje House. But Georgie has no intention of being turned into a simpering, pudding-headed, marriageable miss. She plans to escape as soon as possible—until she meets Lord Sebastian Wyatt. Thrust together in a desperate mission to invent a new invisible ink for the English war effort, Georgie and Sebastian must find a way to work together without losing their heads—or their hearts . . .

She likes science. *shudders delicately* She also has red hair and freckles in a society that abhors both. But it’s her love of experiments that is perceived to be the greater of evils . . . *whispers* Well bred young ladies DO NOT science.

And when her father’s stable and a quarter of a neighboring orchard burns to ash as a direct result of one of said experiments, her parents have had enough.

They pack her up and dump her out at Stranje House, a boarding school rumored to employ such barbarous practices as TORTURE to transform the exceptional daughters of the upper classes into unexceptional, but infinitely more marriageable, ladies.

After touring the dungeon (at her father’s behest), observing the rack (not currently in use), and witnessing two girls strapped into hideous contraptions (one of them a sarcophagus equipped with nails), Georgiana decides she’d rather run than be subjected to such mistreatment.

Instead of an exit, she discovers a hidden passageway, and upon further exploration, she overhears two men—GASP!—discussing the very experiment that got her sent to Stranje House, in the first place.

WHAT DOES IT MEAN?! *giggle snorts*

It means that things aren’t as they appear, of course.

Except for the fact that her parents are wretched for leaving her in a place they believed to be as awful as Stranje House . . .

There’s no escaping that fact for poor Georgiana.

But Miss Stranje gives her an opportunity to do what she loves, to make a difference, to make a significant contribution to the world, and she grabs onto it with both hands.

Among the other girls, only Lady Jane has a gift the can be construed as mundane (a flair for making estates profitable), while the others have . . . more unusual gifts. There’s Tess, who has prophetic dreams and seems to understand animals, Sera, who sees the truth of things, and Maya, whose voice is strangely compelling.

But why is Miss Stranje collecting these outcasts of society? Why are such extreme measures being taken to ensure there will be no interference from their (despicable) relations?

Read it and find out. *winks*

A SCHOOL FOR UNUSUAL GIRLS by Kathleen Baldwin . . . is utterly and delightfully . . . ridiculous. The next time you need a pretty bit of fluff to cleanse your palate, I highly recommend you give this one a try. If you’re unsure, try the preview chapters. That’s what I did, and I was hooked before I reached its end.