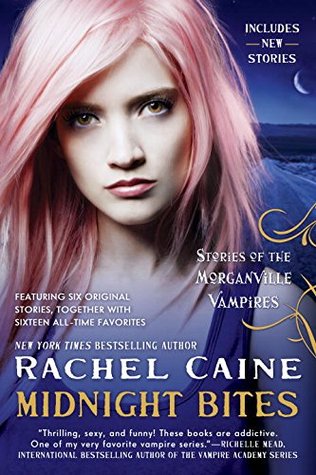 By day, Morganville, Texas, is just a typical college town. By night, the vampires emerge and take control....
In a town where it’s not safe to be out after dark, student Claire Danvers and her friends have had their fair share of thrills. But Morganville still has a few secrets left to tell.

Now, in this collection, you can venture down the town’s strange streets, revisit all the tales you’ve come to love, and experience six new stories featuring your favorite Morganville residents—both human and vampire...


Twenty three short stories in the Morganville Vampire world? It was a total no-brainer for me to want to read them. Some of them were exclusives-written for backers of the web series set in Morganville, some have already been published in anthologies, some were previously posted on the series website, and all added a bit more to my understanding of the characters from this beloved series.

To be honest, I only read 68 percent of this book. Not because I didn’t like it, but because I have only read the first ten books in this series and I didn’t want spoilers. Of course, I had to get to a spoiler to know when to stop, and I did. I do plan to finish this book someday.

Main series character Claire, is only seen from other people’s point of view in the stories she shows up in. It was fun to see what others thought of her, since we never do in the books. Instead, we get stories about Myrnin, the town’s resident sometimes mentally ill vampire, Eve, goth girl extraordinaire and Claire’s best friend and roommate, Shane, Claire’s boyfriend and roommate to Eve and Michael, Amelie, the town vampire Founder, and Oliver, her second in command, Richard Morrell, initially the son of the mayor and brother to the town mean(evil) girl Monica, and even the town police chief, Hannah Moses.

Two of my favorite stories were the ones about Myrnin. He’s easily one of the most popular characters in this series, probably because he’s the most unpredictable. One minute sane as can be, the next completely out of his mind, and mostly charming, even as he threatens someones life. In Myrnin’s Tale, we finally get his back story of how he became part of the vampire world back hundreds of years ago, and yes, he was strange even then. A haunted house and a malignant ghost girl star in the second Myrnin story, titled, Vexed. Oliver is along for the ride, but it’s truly Myrnin’s story. Spooky, and outright scary would describe this story to a tee. I thought both of these were not only interestingly told, but also gave great insight into Myrnin’s character as a whole.

Hannah Mose’s story involved the mystery of a young human girl laying in an alley all night while bleeding. Bloody, but no vampires involved? Unheard of in Morganville. It’s up to Hannah to solve the mystery, and save the the day. This was easily another favorite of the stories for me, as I am always up for a good, albeit, short mystery. I was also intrigued with the stories written from Eve’s point of view. Although she has a horrible back story of child abuse, she remains strong, snarky, and resilient-with a side of vulnerability.

There’s not enough room to tell about each of the stories, but suffice it to say, that as always, they are well written and all add to the saga of life in a town owned and operated by vampires. A town where humans can never leave if they are born there, or if they are from somewhere else, but are now in the know about the vampires.

Some of these stories are just a few pages, others several pages, but all were easily read and I enjoyed all of them. I recommend this to other Morganville Vampire fans, ones that want to know more about their favorite characters, or to just experience more of life in Morganville. Good read!

I received a copy of this from the publisher in exchange for a fair and honest review.