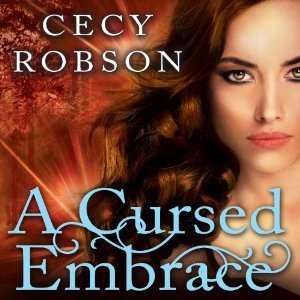 Celia Wird and her three sisters are just like other twentysomething girls—with one tiny exception: They are the products of a curse that backfired and gave each of them unique powers that made them, well, a little weird.…

After Celia Wird and her sisters help master vampire Misha save his family, their powers are exposed to the supernatural community of the Lake Tahoe region. But fame comes at a price, and being “weird” isn’t always welcome.

To make matters worse, Celia desires the love of Alpha werewolf Aric, but his pack is bent on destroying their relationship to preserve his pureblood status. And once weres start turning up dead—with evidence pointing to the vampires—she must face the prospect of losing Aric forever. But the chaos only masks a new threat. An evil known as the Tribe has risen—and their sights are set on Celia and her sisters.

A CURSED EMBRACE put my emotions through their paces; first I experienced joy over Celia solving her Aric/Misha crisis, then frustration when the latter crashed & burned, followed by grief over what befell the Wird sisters, and finished off the spectrum with bewilderment because of the ending. I love novels that are able to get this kind of a reaction out of readers, and boy did Cecy Robson and Renée Chambliss ever get one out of me!

The WEIRD GIRLS universe offers tons of original twists on everyday paranormal lore which is a huge draw for genre fiction bookworms. It’s the little things that make all the difference such as a gold allergy instead of a silver one, and exceptions to the rules like Gemini. I enjoyed the nature of this installment’s plot more than its predecessor, although I did find that too much emphasis was placed on the romance.

The four sisters continued to make names for themselves as characters, especially Celia, and I liked that each of the individual couples got some exposure as well. However, I wasn’t thrilled with the eldest Wird’s temper tantrum as a result of her mate making the only call available to him given the circumstances. It was selfish, and lasted longer than necessary, albeit admittedly he could have went about it differently too.

Renée Chambliss delivered another spellbinding performance, and complain as I may about Celia’s outbursts, these particular scenes allowed the narrator to show her mettle by giving these emotionally charged scenes her all. Perhaps she even over-acted them, and is partially to blame for my main beef with this audio. Regardless, I enjoyed Chambliss’ rendition, and am kinda bummed that I’ll have to switch to reading after book 3.

A CURSED EMBRACE was just a hair’s breadth away from Urban Fantasy perfection!

Was this review helpful? If so, please vote for it on Amazon or liking it on GoodReads!