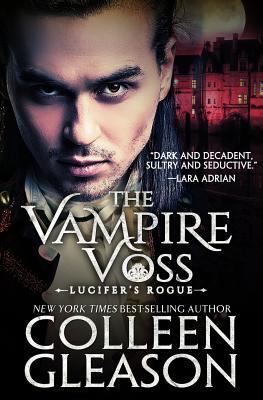 Even after centuries of lust, hedonism, and women, Voss, the Viscount Dewhurst, rarely finds himself bored. As a member of the Dracule, he is a rogue of the first order, a man who loves nothing more than a warm woman, excellent vintage, and even a puzzling challenge to keep his mind active.

But when one of his seemingly harmless manipulations sets him on the path to seduce the beautiful Miss Angelica Woodmore, things become a little less simple…a lot more passionate…and definitely more complicated.

And when the most evil vampire of the Dracule puts Angelica in his sights, Voss will have to risk everything to save her…and possibly his own soul.

I literally devoured this author’s, The Gardella Vampire Hunter series, although since it ended, there are new ones that I have yet to read. I recently discovered this series by her, also set in Regency era London. It’s a trilogy and set in the same world as the hunter series, only this time it’s from three different vampires point of view-one for each book. In the hunter series, the vampires are portrayed as evil creatures, ones with only one thought in their head-drinking blood and causing people’s destruction. It was interesting seeing the world from the vampires perspective this time around.

First up, Voss. He’s arrogant, charming, rich, devastatingly handsome, and a bit of a trickster. It seems that all draculai have one thing that can really hurt them if they come up against it, and he’s made it his business to find the Achilles heel of all the vampires with whom he associates. He wants it to use as leverage or to sell for information. When Chas, a vampire hunter goes missing, his younger sisters have to be taken in by another vampire, Dimitri. Chas may be a vampire hunter, but he maintains a friendship with Dimitri. Dimitri may be a vampire, but he denies himself any of the pleasures that most vampires surround themselves with. Of course the two woman, Maia and Angelica, have no idea of their brother’s secret life or that they are staying with a vampire. Voss wants to meet Angelica because she is rumored to have the gift of being able to see when someone will die and under what circumstances. More of that information gathering he wants to do for profit. Angelica is beautiful, pure, intelligent, and actually is less straitlaced than other ladies of her era, much to her sister’s chagrin at times. She is hopelessly drawn to Voss-and him to her. A recipe for disaster for them.

At first, I really didn’t care for Voss because he really wasn’t nice. At all. Falling for Angelica starts to change him in ways he never dreamed possible. Angelica comes up close and personal with what happens when a vampire is in ones life, and it wasn’t always pretty. I did really like Angelica’s character, she’s really smart for this time period of simpering women and I enjoyed that. But the couple seems doomed from the start. I spent most of the book expecting an unhappy ending of one sort or another. Not to worry though, and that’s all I am saying. As with the previous series, this read became a thriller of sorts, with kidnappings and murders of innocents due to vampires on a rampage. It seems Chas has really made a horrible vampire extremely mad. So revenge is on the table here as well. The only slight problem I had with this book was that it was a tad bit slow, but only in the beginning. Things picked up nicely once the two sisters enter the story.

This is not really a cross-over novel from the other series, but one character does show up a few times from the hunter series and that was a nice surprise. It doesn’t matter if you haven’t read the other series before this one, but you really should if you enjoy reads that are well plotted and written, with good characters, action, and intricate world building. That can be said about both of these series. Ms. Gleason hasn’t disappointed me yet with any book I have read by her. I recommend this read, and the hunter series as well, to adult paranormal romance and urban fantasy fans. Or even historical romance readers that like an exciting read. From what I understand, this series gets better with each book, so I am looking forward to reading, The Vampire Dimitri next.

FYI, the book was previously released under the title, Lucifer’s Rogue. Also, a better cover might be a good idea.