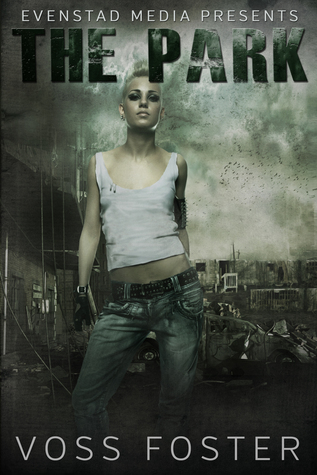 The Park: Evenstad Media's newest reality show. There are no laws. There are no rules. The only goal is to stay alive. But in Evenstad's arena, things are far from simple. Outfitted with strange new weapons, trapped in the dark, afraid for their lives, it's only a matter of time before somebody takes the first shot.

And all the while, the world watches. Some in disgust, some rapt, but all feeding Evenstad, and all oblivious to the horrors they're helping fund. By the time anyone notices, will there be time to put an end to it? Or will it be too late?

I learned about this book when librarian Robin Bradford (@Tuphlos) tweeted about it during her #collectiondevelopment. The tweet included the cover and “So if the The Purge was real, on tv, and a gameshow? Great cover. Netgalley.” Now, I rarely go on Netgalley, especially for new-to-me authors. I usually only pick up books for authors I already know. This however, really caught my eye and I was in the mood for something completely different, so I decided to take the chance.

The Park is a really interesting idea. Basically, Evenstad Media has “randomly” chosen 12 people from 12 completely different backgrounds to play the game. They are put into a trailer park, each with a medallion that can be used as a weapon of some kind. Some are stronger than others, but there is a timer that will prevent them from reusing the weapon too quickly. The more powerful weapon, the longer between each use. There are also other of these medallions hidden around the park. Whoever is still standing at the end of the game, wins.

Now, I haven’t seen The Purge or any of the movies like that. I have read The Hunger Games, and this kinda has that feel to me. 12 players and play until there is one survivor. There are no children. The players are all adults. From the age of low 20’s to mid 80’s and everywhere in between. There is no preparing for the these games. The players just wake up there with a note pinned to their chest. The media corporation has more up their sleeve than just a gruesome reality show.

The story is told entirely from journal entries from the players, emails from the executives at Evenstad Media, and blog posts of people watching this game show. This is the part of the story that I didn’t like. I think I would’ve enjoyed the story more if it were told in a more traditional fashion, I might have enjoyed it more. I just didn’t feel that close to any of the characters and I think it was because of the journal entries. We really don’t get to see actual interactions between each of the characters. We don’t get to see any of the action scenes. There is also very little dialogue.

All in all, this was a very interesting story. It was a new take on science fiction and thriller that I think has some promise. I’m just not sure if this type of storytelling is meant for me. I’m just a very character driven reader and I didn’t connect the characters as much as I would like. It was a page turner though. I would recommend that if this is something that sounds interesting to you, that you check it out. At the time of this posting, The Park a free ebook download, so you can’t beat that price to check out this story.

24 responses to “Review: The Park by Voss Foster (@mlsimmons, @vossfoster)”