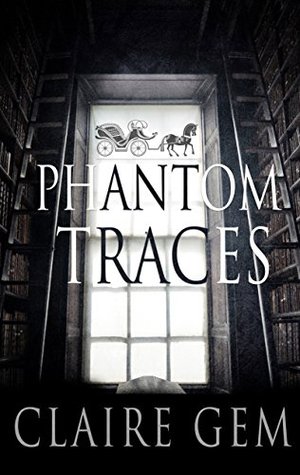 A history professor in a tweed jacket, a cheeky Goth chick, and a pipe-smoking, book-hurling ghost. Put them all together in an antiquated library and, well…

Professor Jack Wood’s silver-streaked hair definitely ages him, and he can thank Killer Dawn for that. He won’t be falling into the love trap again anytime real soon. But this new librarian has him curious, with her head-to-toe black Goth garb, piercings, and a defiant attitude to match. Definitely not his type of girl, but still…

Abigail Stryker’s got her work cut out for her. The last two librarians didn’t last a month before airborne books chased them off. But Abby’s determined to make her new life a go–and to stay as far away from older men as possible. Once was enough. Might be tough to do when the library’s best patron is none other than dreamy-eyed Jack Wood. And it seems the eccentric ghost may have taken a shine to her as well.

Ghost stories have always interested me, even as a young child. That being said, I don’t read that many of them. When I came across the synopsis for this book, it intrigued me and I decided to go for it. I am really glad I did.

Abigail Stryker, fresh off of getting her masters in library science, takes a job in a small town library. She’s twenty six, nursing a heartache, all the while trying to re-invent herself. To that end, she now looks not only edgy, but goth. She knows that the library is supposedly haunted, but she’s not going to let that stop her. The small town is the one her beloved aunt lives in, so that’s where she wants to live. Her aunt is Wiccan and runs a small store in the town. She meets history professor Jack Wood her first day at the library. He is thirty eight, fit, handsome in a kinda nerdy way, and is immediately drawn to Abby. On Abby’s part, she is over romance and wants nothing to do with it, especially if it involves an older man. Oh, those best laid plans..

On the ghost’s part, he’s fond of throwing books around, opening a window to let his pipe smoke out, dimming the lights, and occasionally spinning the hands of the clock around-and backwards, as well. It’s not long before Abby and Jack team up to find out why the ghost wont move on. To make things even dicier, Leda, wife of the county commissioner, Dennis Ludwig, has her own agenda concerning the library, and she is determined to have the historical library be closed. She goes out of her way to ruin anything good that Abby tries to do with the library.

This was a lot more than just a ghost story. It ended up being a sweet and even sexy at times love story, a mystery, and a story about how a town helps a young librarian find her way back from a horrible heartache and chapter in her life. There’s typical small town characters, and some not so typical small town characters introduced. It all takes place in the Blue Ridge Mountains of North Carolina and in the surrounding forest. Beautifully described by the author, it made me want to visit-or at least go there for a picnic!

I found this book to be well written, with characters I could easily picture, along with a good premise. For awhile I had a big problem with the way one of the peripheral characters was acting and I thought it was just for no real reason, until I was proven wrong. I should have just had faith and waited to see what was going on. It’s one of those easily read books, ones that make you want to curl up with it and enjoy in front of a fireplace, or in my case, in bed.

Adult read. I received a copy from the author in exchange for a fair and honest review.