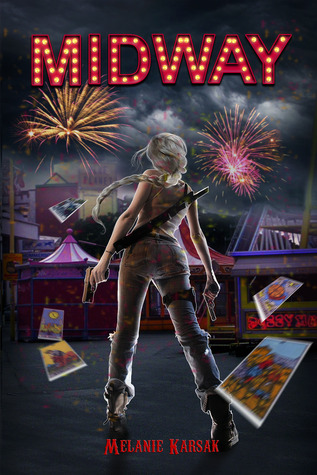 Step right up, ladies and gentlemen, for the beginning of the end.

Carnie. Ride jockey. Roustabout. White trash. Tilt girl. Gypsy. Cricket has been called a lot of things, but she never thought survivor of the zombie apocalypse would be one of them. One day she’s barking on the midway, and the next day, the world is eating itself alive.

Cricket, along with Vella, a tarot reader, and Puck, Cricket’s mangy mutt, find themselves running for their lives, but where can you hide when mankind has fallen? Cricket will need help if she hopes to survive.

Luckily for her, we were never really alone, and apparently, magical forces want to keep this tilt girl alive.

Join Cricket in this unique zombie apocalypse series. It's all fun and games until someone ends up undead!


Recently I read and reviewed The Harvesting. It was the story of a woman who becomes a leader in her small town when the unthinkable happens. Zombies and the end of the world. Now with this novella, the author introduces another main character into this dystopian world.

Cricket is a Tilt-A-Whirl worker in an all but broken down carnival. She grew up in the carnival, and now owns her own Tilt, due to her father’s death. She’s alone in this world with the exception of her dog, Puck. Of course the carnies are kind of like a big family. When “flu” hits the carnival, she decides to pack up the ride and move on with her fellow carnies. Only when it’s time to go, only her friend, Vella, is still ready to leave. That’s not to say that her other friends have left, rather that they are now walking around trying to eat her. Of course, it’s not an ordinary flu, rather it’s one that causes zombies.

Cricket is such a real character. She’s extremely strong willed, honorable, has had little in the way of education, but has learned all she needed to know about life from her dad, and while traveling with the carnival. Where Layla in the previous installment, had some time(days)and a grandmother with the “sight” to prepare her, Cricket is totally caught off guard by the events that happen. Vella is Romanian and a fortune teller. She knows that things aren’t always what they seem, and has more than a bit of the “sight” as well.

As with The Harvesting, this story is an adventure from start to finish. I call it adventure, but it’s actually a race to escape the walking dead that are all around her and Vella. Along the way other characters are introduced, and some are lost. This is definitely not a story where everyone lives, and there are not necessarily happily ever afters. But what it is, is the story of good versus evil, in some ways. Not all people that survive in this world are good, but there are still good people to be found, ones that will be needed to start the world over-if it survives.

Suspense, life and death moments, and good characters abound in this fantastical world the author has created. It’s creepy at times, but it’s fast paced when it needs to be. Highly recommended to mature young adults to adults, due to violence.