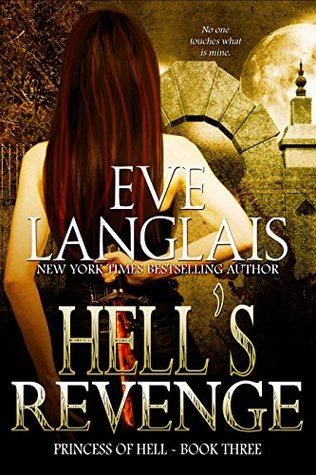 I am literally going to kill my mother.

To say I have mommy issues is putting it mildly. The woman who abandoned me has a lot of nerve to just saunter back into my life without warning and drop a bombshell of atomic proportions. I tried to kill her as a way of resolving my inner Freudian issues, but my damned boyfriends stopped me. Spoilsports.

As if wanting to strangle my birth mother isn’t enough, once again, someone is messing with my life and a new player steps in to save me. Did I mention my dark knight is tall, gorgeous, and fanged? Just don’t tell my lovers because apparently they’re not willing to share me with the undead.

The final showdown with the mysterious figure—also known as the major pain in my ass—fast approaches. I don’t care how powerful they are. They screwed up big time when they took something precious of mine. It’s never a good idea to piss off this princess of Hell because revenge is my middle name.

Thrust into the final showdown, thankfully, I’ve got more than my fallen angel and kitty at my side. Dark, Fanged, and Delicious is determined to join my group. I’m facing my biggest challenge yet, but don’t worry, with the help of my family and lovers, Hell will have its revenge.

In Hell’s Revenge, we have Muriel, her two men and her demonic lord of a father all sitting down for a cozy dinner. Until there is a knock on the door. It is quite the surprise when it is opened only to realize that it is a woman who is claiming to be Muriel’s mother and Mother Nature. Oh, and she wants Muriel’s unborn baby.

It is prophesied that Muriel’s child will bring about the end of the world. Muriel doesn’t even believe that she is pregnant and supposedly, both men are the father. How is that even possible? Muriel uses that as an excuse to put her head in the sand and deny that she is even pregnant.

She does go to meet with her father’s crone, Nefertiti. Who confirms the pregnancy and wants it aborted, because she is the one who had the prophecy that the end of the world will come. I guess the same was said before Muriel came into the world. However, there are people who want the child for the powers she will have. So, Lucifer sends a his best tracker to help protect her.

If you haven’t read the reviews of previous books in this series, Muriel’s powers are sex based. So when she uses all of her powers, they go searching for a refill and find Terivel the vampire. He gets added to the mix. I don’t know what I think of Terivel. He just doesn’t have much of a part in this book, even though he becomes a huge part of Muriel’s life as one of her lovers. We really don’t get the details of how things are going to go with the four of them together. Are they all going to live together with the daughter? When I read this years ago, I always felt that it was a little unfinished. There is a new book out now, so I hope we learn more in that book.

While, this book isn’t my favorite of this series romance wise. It was still a very fun story. It has many of the great chuckle worthy moments that I’ve come to expect from every Eve Langlais book. I’m really excited to see what the newest book in Muriel’s story has in store for us.

I almost stuck my tongue out in a childish gesture of triumph, but I restrained myself. Look at me, growing up and acting like an adult. Not!

Yeah, when hell freezes over. Oops. That had already happened. I really needed to come up with a new expression.