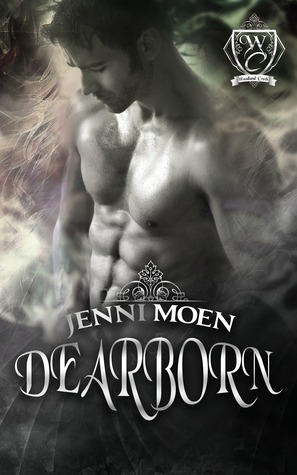 I feel his emotions in living color. As if they are my own.

If he’s angry, I rage with him. If he’s grieving, I do too. When he thinks about the past, I’m right there, walking beside him. I am the window to his soul, and yet, in spite of that, he’s a riddle with no solution.

A puzzle with too many missing pieces.

We always want what we can’t have. All I wanted was some peace and quiet. To fall in love with someone untouched by the magic of Woodland Creek. I craved normalcy.

But not as much as I craved him.

When he returns to town a broken hero, there’s no choice to be made. I will reach him when no one else can. Together, we will face a future he doesn’t want.

Why? Because our love is pure magic.

A small town full of supernatural beings? Of course, I wanted to read it. So when Kimberly at Caffeinated Book Reviews recommended this read, I was all over it. I am amazed that I had not heard of these books before, simply because there are so many of them, written by lots of different authors, and they all take place in the magical town of Woodland Creek.

Willow has spent her life in Woodland Creek. She inherited a diner and the house that went along with it, and now runs it. Her best friend is Ryan, a bear shifter, with the added gift of mind reading, and he is also the diner’s cook. On Willow’s part, she is an empath and can feel peoples emotions and see auras. When her major crush from high school, Quinn, walks into her diner after a fifteen year absence, his emotions and rainbow colored aura, literally makes her sick. He’s home from Afghanistan, his career over due to PTSD, and he’s a war hero. Quinn is a very broken man, a far cry from the popular, fun loving, boy he once was. When he agrees to help Willow with the renovation of her historical home, in order to get it ready for Ryan’s wedding, the two find the friendship that blossomed, but never went anywhere in high school. This time it does, but it’s not without it’s problems.

Willow was the perfect heroine for this well written story. She’s strong willed, smart, ambitious, and has a good heart. She sees Quinn again and immediately wants to help him overcome all his psychological problems-among other things. On Quinn’s part, he was planning on leaving Woodland Creek the day he visited the diner, but didn’t(couldn’t)after meeting Willow again. He knows how broken he is, and he has secrets that even he doesn’t understand. The last thing he wants to do is inflict all of that on Willow, but of course he can’t help himself.

I liked how the town was split between the people with magic and the ones without. And the ones without pretty much knew nothing about the magic. If they did, then hunting in the surrounding forest might have been abolished, but it hasn’t been. The towns shifter population have to be careful during the different hunting seasons-to say the least. The ley lines that run through the town guarantee that the supernatural will always be drawn there.

For me, this was a wonderful paranormal romance, filled with all sorts of magic, shifters, wizardry, and there’s probably all sorts of other things that don’t necessarily happen in this book, but might in another installment. I believe that these are all standalone, but I could be wrong, as this is my first foray into this world these authors have created. But it certainly won’t be my last. If you love adult paranormal romance, I would definitely recommend that this is one that’s not to be missed.