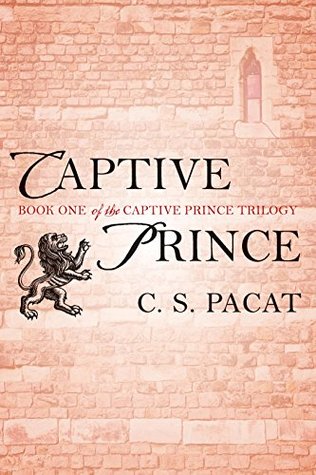 Damen is a warrior hero to his people, and the rightful heir to the throne of Akielos, but when his half brother seizes power, Damen is captured, stripped of his identity, and sent to serve the prince of an enemy nation as a pleasure slave.

Beautiful, manipulative and deadly, his new master Prince Laurent epitomizes the worst of the court at Vere. But in the lethal political web of the Veretian court, nothing is as it seems, and when Damen finds himself caught up in a play for the throne, he must work together with Laurent to survive and save his country.

For Damen, there is just one rule: never, ever reveal his true identity. Because the one man Damen needs is the one man who has more reason to hate him than anyone else . . .

If you haven’t been seeing/hearing the buzz surrounding THE CAPTIVE PRINCE by C.S. Pacat, you’ve probably been living under a rock. I’d seen it EVERYWHERE, even before one of my favorite authors recommended it in her newsletter (<——why I finally caved).

My impression before reading it was that it was some kind of pseudo-fantasy/MM/BDSM mashup . . . and that impression was fairly accurate.

Not my typical choice of reading material, but HYPE. And CURIOSITY. *shakes fist at curiosity gods*

As one might guess from the title (if one pays attention to things like titles *shakes fist at self*), the MC of this tale is a prince (Damen) made captive . . . A prince given as a sex slave to the prince and heir (Laurent) of a rival kingdom, only they don’t know he’s a prince, but that’s a good thing, b/c Damen did a really, really Bad Thing in the last war, and if Laurent found out Damen was actually the REAL Damen, and not just called “Damen” b/c Kastor (Damen’s illegitimate usurping half-brother) thought Laurent would be amused by having a sex slave named for the man he most hates in the world . . . Well, that would be Bad.

Did all of that cross your eyes? B/c as convoluted as it sounds, it’s deceptively simple.

What isn’t simple is everything that came after the initial introductions, and how I feel about it.

Obviously, as a prince, Damen isn’t too keen on becoming a sex slave. But who cares? B/c sex slave.

And even though there technically wasn’t much sex (on page), the hedonistic attitude of the nobility permeated the atmosphere, and the threat was constant, like background noise. And YES . . . I do mean threat.

But in that weird, willful suspension of disbelief way that’s exciting even as you’re consciously uncomfortable.

Enter Nicaise, the thirteen-year-old “pet” of a dirty old man in Laurent’s court. The thirteen-year-old who’s been serving in his role as “pet” for THREE YEARS. Who is maneuvering to keep his position, b/c he knows—EVERYONE knows—that he has maybe another year before he outgrows his master’s tastes.

So there are two things you need to know before picking up this book:

I almost stopped 20% in, when Nicaise first showed up. I’m not sure what kept me going. Could’ve been the remnants of curiosity. Could’ve been the person who made an asinine comment on one of my status updates about how pedophilia isn’t being endorsed by the book, which pissed me off enough to make me want to finish it, all the better to KILL IT WITH FIRE. B/c really? Show me a book that does endorse the sexual violation of children, and I’ll show you a jail cell. #GTFO

Either way, I kept going.

And much to my chagrin, I found myself fascinated by Laurent.

He’s a prince with the foul mouth of a tavern brawler. Hatred burns in his eyes, but he almost always maintains a perfect calmness that is infuriating. He’s a brilliant manipulator who superficially appears to be no more than an indulged royal brat.

Beyond my newfound obsession with Laurent, I was reading not only to try to understand my prince, but in anticipation of other (despicable) characters’ downfalls.

But if I’d known what I was getting into, I’d never have started.

A secondary issue was the thinly veiled attempt to elevate the book above the stereotypes of its genre.

I have an extensive vocabulary. I majored in English, but even if I hadn’t, you can’t read as much as I do and not pick up an impressive number of words along the way. Even so, it’s not unusual for me to make use of the handy, dandy word lookup feature found on all ereaders.

What is unusual is having to use said lookup feature every few pages.

It took awhile to catch on, so I missed the early ones, but after I grew wise to the tactic, I began highlighting: appurtenances, peripatetic, damascened, febrile, machicolation, etc.

After I acclimated to the overuse of words rarely (if ever) found . . . anywhere, I began to notice that many of them were frou frou stand-ins for more common words and phrases.

A room wasn’t ostentatious, it was, “afroth with ornament.”

I was pretty sure “afroth” wasn’t a real word. I was further convinced when the word lookup yielded no results. BUT. Word lookup isn’t infallible, so I googled it . . . And discovered that it was a real word, but had been misused. Unless Pacat intended to say the ornaments in the room were, “in a state of lively or angry excitement.”

I usually applaud the Shakespearean tactic of adapting, evolving, creating words to suit your purposes . . .

In this case, it felt disingenuous.

Like the author had hangups about the type of book she was writing—SMUT. Maybe intelligent SMUT, but still SMUT—and decided to overcompensate by impressing her readers with her intelligence and/or education via the implementation of obscure words that none of us have ever heard of.

Instead, it provided a distraction, b/c constantly having to lookup words.

SO. THE CAPTIVE PRINCE by C.S. Pacat is a deeply flawed book, despite its low page count. If you can handle rape and sexual exploitation as abhorrent cultural practices, then you, too, should willingly fling yourself into this deep, dark hole. If you can’t, RUN AWAY. If you don’t, you’ll probably find yourself as entangled as I am, but you’ve been forewarned, so you’ll have only yourself to blame.