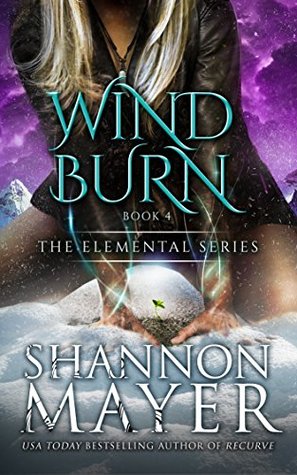 "My name is Larkspur, and I am an Elemental.”

The King is missing and his mind is cracked. It is up to me to find him before the Rim is taken over by the bloodthirsty heir to the throne.

But the path to finding the King is anything but straight, and I find myself in the human world facing possible banishment. All to find a Tracker who happens to be on the run from a demon, yet she is my only hope in bringing my father home.

Nothing is as it seems and I'm uncertain who is friend or foe. My impending punishment threatens to suffocate me as I defy our laws and fight to bring peace to my home. . . and fight to keep those I love the dearest alive.

How will I get both my father and I out of this one unscathed? Welcome to being The Chosen One.


Fans of Shannon Mayer’s RILEY ADAMSON series will appreciate this installment because it fills in some of the blanks of what happened before PRICELESS, and there’s a bit of character crossover, but nothing too major, so regardless of whether you’re in-the-know on Tracker happenings or not, you’ll enjoy WINDBURN. This was however the bottom-of-the-pile volume out of the four, at least for me it was, on account of it being a transition book, and the fact that compared to the other three elements, it felt like air drew the short straw.

If it weren’t for all of the links to the author’s other ten novels, I don’t think that I would have liked this story nearly as much due to the threads being a little jumbled. Lark is searching for her father, sampling the Cactus/Asher goods, fulfilling her favour to Elle, and making her mark on two of the ELEMENTAL families among other things. I enjoyed discovering why Giselle gets paid in stuffed animals, how the protagonist earned her nickname, and Blackbird’s identity, but there were no big aha moments to speak of other than maybe that last one.

This series started with earth, then moved on to water and fire, so I’d anticipated that air would receive an equal amount of attention. Sadly, I found that the world building for the fourth power type was rather light. Lark’s stay in the Eyrie was short lived, and the Sylphs didn’t get anywhere near the attention that the other Elementals did which was a letdown because one of the highlights of these books has been the many and fascinating differences between the families. The two-year time jump certainly didn’t help either.

Mayer has a real talent for fleshing out characters that you’ll either love or hate; the heroine is moving away from the vulnerable girl of RECURVE, and towards the formidable force who helps to save the world in BLOOD OF THE LOST. I believe that the next title will center around the lead’s second ability which has me all kinds of excited! Peta was her usual delightful self, and Shazer is growing on me too. On the opposite side of the spectrum we have Lark’s entire family (except Bella), Cassava, and the Mother Goddess herself. *shakes fist*

WINDBURN was about what you’d expect from a bridge novel. Good, but not great.