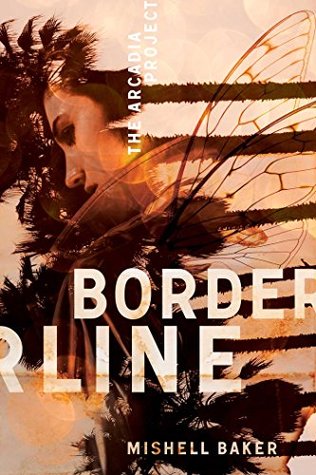 A cynical, paraplegic screenwriter with borderline personality disorder gets recruited to join a secret organization that oversees relations between Hollywood and Fairyland in the first book of a new urban fantasy series from debut author Mishell Baker.

Millie is a bit of a mess: she’s cynical, disabled, and self-destructive. And she has borderline personality disorder. So she’s a little confused as to why she’s been recruited for a top-secret agency that oversees deals between Hollywood icons and fairy muses. Even though this hidden, fantasy Hollywood isn’t exactly wheelchair-accessible, Millie is determined to ace her first assignment and not let her mental illness get the best of her. But when her first routine mission takes an unexpected and dangerous turn, Millie finds herself hip-deep in some of the scariest situations Fairyland has on offer—and she may not make it out in one piece…

I’ve been book funky . . . for like . . . WEEKS. I’ve binge-watched: Gotham, The Flash, and the first three seasons of Suits. I’ve decimated my Secret Garden coloring book.

And on the day I read BORDERLINE by Mishell Baker, I tried to read four different books. FOUR. This is the only one that stuck.

Millicent (Millie) Roper is a most unlikely urban fantasy heroine.

She has two prosthetic legs. And I’m not talking futuristic bionic limbs that give her superhero-like speed or strength. NOPE. Just the usual kind. Not that I’m saying people with prostheses can’t be heroes, it’s just not the standard in fiction.

She lost her legs when she landed feet first from a seven story jump, and, YES, I do mean jump—it was a suicide attempt.

A suicide attempt that took place after a failed romance with one of her professors . . . Millie also has BPD (Borderline Personality Disorder).

She’s also one of the most compelling characters I’ve read in recent memory.

When we meet Millie, she’s languishing in some kind of a rehabilitation/recovery facility. With shrinks. She’s been there for six months, and while it seems like her stay hasn’t done her much good, as the story progresses, we see that it really, really has.

She’s learned terms that help her identify her behaviors. She’s learned coping mechanisms. And we learn more about her disease than I ever thought was possible without falling asleep.

But as it turns out, people “marked by unstable moods, behavior, and relationships,” . . . NOT boring. Especially when they get recruited by a government-funded agency to liaise between the humans and the fey . . . Recruited with a bunch of other crazies . . . Who all live in the same house.

Also awesome is Baker’s writing. I have so many highlights, so many ridiculously good examples of Baker’s awesome that it almost physically hurts not to be able to use them all. SO. After careful consideration, I limited it to three:

“I’m Gloria,” she said.
“I, uh.” My brain felt like a bumper-to-bumper traffic jam.
“You’ve never met a little person before.” She giggled, in that cute way Southern women do instead of punching you in the teeth.

I know that giggle. I may have even used it a few times myself.

Then there’s Millie’s painful honesty. Like when she discovers Caryl has separated her more volatile emotions into a familiar:

I had a sudden desperate urge to talk to Dr. Davis. This woman, her former patient no less, had torn her mind in half. Her Emotion Mind was perched on my shoulder while her Reason Mind drove the car and told me it didn’t matter. It was fascinating and horrible, and I was deeply, sickeningly envious.

But where Baker really excelled was in her throwaway descriptions:

Union Station is the sort of place that looks like it ought to have ghosts. And it does, if you count the dead-eyed people shuffling through the cavernous main terminal or perched in uncomfortable chairs, watching rows of demonic red numbers.

That shit is EVERYWHERE.

BORDERLINE by Mishell Baker is that rare something new, something different, something GOOD that we’re all silently hoping for every time we pick up a new book. Baker puts her own unique spin on the fey, while maintaining their basic integrity. Her writing is bloody fantastic. Her characters are real, and I straight-up love Millie—she is deeply flawed, possesses an honesty that is alternately painful and hilarious, and manically likable. Any fan of urban fantasy should definitely check this one out. Highly recommended.