Excerpt
Instead of trying to saw through their winter clothes and their tough muscles underneath, I reached for my magic, raised my hand, and sent a spray of Ice daggers shooting out at the two of them. Ethel threw herself down onto the ground, ducking out of the way of my chilly blast, but Don wasn’t as quick, and several long, sharp bits of Ice punch-punch-punched into his chest. Given how strong dwarves were, he grunted, more surprised than seriously injured, but he did lose his grip on his shovel, which tumbled to the ground.
I dropped my knife, darted forward, and snatched up his shovel, since it was the better weapon in this instance. Then I drew back my arms and slammed the shovel into his head, as though his skull was a baseball that I was trying to hit out past center field.
Thwack.
Don stared at me, wobbling on his feet, his eyes spinning around and around in their sockets. His dwarven musculature might be exceptionally tough and thick, but a cold, metal shovel upside the head was more than enough to put a dent in his bowling ball of a skull. Still, it was just a dent, and he didn’t go down, so I hit him again.
Thwack.
And again and again, until the bones in his skull and face cracked, and blood started gushing down his head, face, and neck. A glassy sheen coated Don’s eyes, and he toppled over, more and more of his blood soaking into the frozen ground.
“Don!” Ethel wailed, realizing that he wasn’t ever going to get back up. “Don!”
She tightened her grip on her shovel, scrambled back up onto her feet, and charged at me again. “You bitch!” she screamed. “I’ll kill you for this!”
Ethel stopped right in front of me and raised her shovel over her head, trying to building up enough momentum to smash through my Stone magic with one deathblow. But in doing so, she left herself completely open; it was easy enough for me to palm another knife, surge forward, and bury the blade in her throat.
Ethel’s eyes bulged, and blood bubbled up out of her lips. She coughed, the warm drops of her blood stinging my cheeks like the snowflakes had earlier. I yanked my knife out of her throat, doing even more damage, but Ethel wasn’t ready to give up just yet. She staggered forward and raised her shovel even higher, still trying to gather herself for that one deadly strike.
Too late.
The shovel slipped from her hands, and her body sagged and pitched forward. She landed facedown in the mound of loose earth that I’d dug up, as though it were a giant pillow she was plopping down on. Well, I supposed that was one way to take a dirt nap.


Jennifer Estep is a New York Times and USA Today bestselling author prowling the streets of her imagination in search of her next fantasy idea.


Jennifer writes the Elemental Assassin urban fantasy series for Pocket Books. Bitter Bite, the 14th book in the series, will be released on Feb. 23. 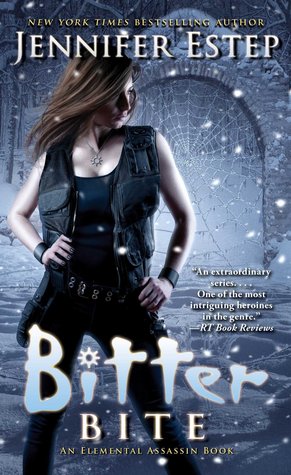 Which is stronger: blood ties or a battle-tested friendship?

It’s not easy being queen bee of an underworld abuzz with crooks and killers. Wielding my potent Ice and Stone elemental magic will only get me so far—my real secret is my tight-knit makeshift family, a motley crew of cops and criminals, dwarves and playboys. My foster brother Finnegan Lane is my right-hand man, but when his suddenly not-dead relative comes back into the picture, I’m the one on the outside looking in.

It’s funny how life works: one minute your best friend is rock-steady, and the next he’s doe-eyed and buying into this whole loving-relative routine to the point of ignoring you. I’d like to be happy for Finn, I really would. But all of my instincts are telling me that beneath the syrupy sweet demeanor and old-fashioned charm, this sudden interloper is planning something. The whole shtick leaves a bitter taste in my mouth. This person might have avoided the grave once, but I’ll put anyone who hurts Finn in the ground—for good.

Finnegan Lane has been the most dependable character in Jennifer Estep’s ELEMENTAL ASSASSIN series. The rest of the cast have all had temporary moments of weakness, or lapses in judgment, even Gin Blanco. I’m not saying that he’s perfect because he’s not, but he’s never infuriated me to the point of wishing that he was next on the Spider’s hit list. I can’t say the same of other linchpin secondaries like Owen or Bria. So, he was definitely due, and BITTER BITE delivered his misadventure in style along with a new plot arc that I can’t wait to see bloom!

I have no idea how many installments the author originally had planned because over the course of fourteen books many story lines have reached their conclusions, and yet Estep has somehow managed to not only keep the ball rolling, but also at a pretty decent clip. What I mean by that is I enjoyed reading this volume as much as the first. The high levels of action, entertainment, mystery and feels haven’t dropped in the least! This title tied into previous threads involving Mab Monroe, Fletcher and Eira Snow while weaving another biggie that I can’t comment on because I like to keep it spoiler-free.

Gin underwent a bit of a transformation too; she relied on her Stone and Ice magic more than her knives in this novel which is unusual for her. She tends to be a physical fighter, and even though she does tap in to her Elemental juju regularly, it was nice seeing her fully embrace it. I thought that her reaction to Finn’s long-lost relative was mature, and aside from getting a little emotional (understandable), Blanco dealt with the situation like a champ. There were flashbacks of her and Lane’s childhood together too which I loved.

Finn’s blunder was totally relatable, and easy to accept because anyone in his situation would probably make the same mistake. Yes, I got annoyed when he got testy with Blanco, or blew off the Deveraux sisters; however, he remained realistic with his expectations, and when all was said and done, he apologized for his crappy behaviour. Lane also showed up when it mattered! Plus, to paraphrase the blurb: I wanted to be happy for him, really I did. Similar to Gin, I saw the potential for disaster, but given the importance of family, I had hoped for the best.

Leave a comment with your e-mail address to be entered to win a copy of BITTER BITE by Jennifer Estep. US/Canada only. Ends February 26, 2016 at 11:59 PM EST.