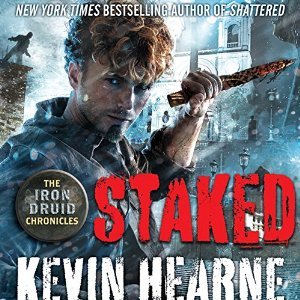 When a Druid has lived for 2,000 years like Atticus, he's bound to run afoul of a few vampires - make that legions of them. Even his former friend and legal counsel turned out to be a bloodsucking backstabber. Now the toothy troublemakers - led by power-mad pain-in-the-neck Theophilus - have become a huge problem requiring a solution. It's time to make a stand.

As always, Atticus wouldn't mind a little backup. But his allies have problems of their own. Ornery archdruid Owen Kennedy is having a wee bit of troll trouble: Turns out when you stiff a troll, it's not water under the bridge. Meanwhile, Granuaile is desperate to free herself of the Norse god Loki's mark and elude his powers of divination - a quest that will bring her face to face with several Slavic nightmares.

As Atticus globetrots to stop his nemesis, Theophilus, the journey leads to Rome. What better place to end an immortal than the Eternal City? But poetic justice won't come without a price: In order to defeat Theophilus, Atticus may have to lose an old friend.


After SHATTERED, I had concerns that THE IRON DRUID CHRONICLES may be taking on water with an excess of POVs, mythologies and threads. STAKED slowed its roll a bit by limiting the amount of chapters from Owen and Granuaile’s perspectives, and I certainly can’t find fault in Kevin Hearne’s comedic writing style, but the female druid continued to annoy me, and when compared to some of this series’ epic stories, I found that the conclusion to the two century-long vampire saga was rather anticlimactic.

Atticus and Oberon have jetted around most of the globe and several planes; however in this installment they visited Canada, and tons of familiar cultural references ensued including a visit to Timmies and the hound discovering his new favourite dish: poutine! Readers also get to discover why one never wants to be “Nigel in Toronto”, and Owen was temporarily put on dog sitting duty which was seriously the funniest thing ever. Listening to Oberon explain to the archdruid how modern tech works was priceless.

Granuaile has to be one of the most irritating characters that I’ve had the misfortune of experiencing; I literally counted the number of scenes from her POV because if I reached ten I was DNF-ing this audiobook. Happily, that didn’t happen, but her personal crusade against her stepfather, and elitist attitude about what a druid’s mission *should* be pushed me to my breaking point. Owen on the other hand is an absolute peach! I like the direction that his tangent has taken, and of course Oberon is still the bestest of sidekicks.

Luke Daniels is THE man for the job with regards to narrating this series. As soon as he starts talking I immediately know which persona he’s assumed whether its the protagonist’s or a secondary that’s not made an appearance for several novels. In this title he dabbled with some French, and even though he botched one word pronunciation, I give him full marks because the rest was on the nose. His rendition of Owen is SO good, and the last scene with Oberon and Orla is as close as humans will ever come to dog speak.

STAKED was an step up from the previous book, but I still pine for the pre-SHATTERED days.