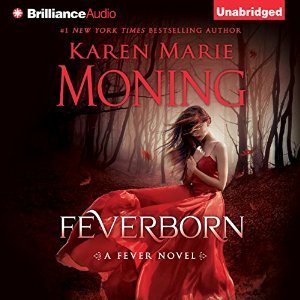 In Karen Marie Moning's latest installment of the epic number one New York Times best-selling Fever series, Mac, Barrons, Ryodan, and Jada are back - and the stakes have never been higher and the chemistry has never been hotter. Hurtling us into a realm of labyrinthine intrigue and consummate seduction, Feverborn is a riveting tale of ancient evil, lust, betrayal, forgiveness, and the redemptive power of love.

When the immortal Fae destroyed the ancient wall dividing the worlds of Man and Faery, the very fabric of the universe was damaged, and now Earth is vanishing bit by bit. Only the long-lost Song of Making - a haunting, dangerous melody that is the source of life itself - can save the planet.

But those who seek the mythic song must contend with old wounds and new enemies, passions that burn hot and hunger for vengeance that runs deep. The challenges are many: the Keltar at war with nine immortals who've secretly ruled Dublin for eons, Mac and Jada hunted by the masses, the Seelie queen nowhere to be found, and the most powerful Unseelie prince in all creation determined to rule both Fae and Man. Now the task of solving the ancient riddle of the Song of Making falls to a band of deadly warriors divided among - and within - themselves.

Once a normal city possessing a touch of ancient magic, Dublin is now a treacherously magical city with only a touch of normal. And on those war-torn streets, Mac will come face-to-face with her most savage enemy yet: herself.


I loved the first six books, but then BURNED happened, and I started to ask myself whether I should quit while the going was good. Turns out the answer was yes. I had to pause FEVERBORN for about a week, and listen to another title that just so happened to be narrated by the brilliant Luke Daniels as well on account of the controversy surrounding the previous male narrator of this series: Phil Gigante. Or, more specifically how Karen Marie Moning handled it. I found it impossible to concentrate on the story, and lost a lot of respect for her as an author.

Anyway, the goal of this review isn’t to bash peoples’ poor decisions; however, I felt that it was worth mentioning given how these events had a huge bearing on my opinion of this audio. The novel wasn’t abysmal which is why I still gave it 3-stars. The chemistry between Mac & Barrons continues to be smokin’, although I do feel that their time has past, and that this volume should have been about Dani. The POVs weren’t as all over the map as the previous installment, so that was a big plus, and I enjoyed the weirdness of the new character, Shazam.

We got some much needed background on how Jada came to be, and despite the fact that I wasn’t wholly sold on Moning’s explanation nor on the revamped identity of this on-again-off-again heroine, it was something at least. I wish that we’d gotten more of Christian and Ryodan, and less of Mac & Barrons because again—been there, done that. I’m not sure how I feel about the Alina development either… I mean, this girl’s been in the ground since DARKFEVER, so why oh why dredge her up after eight books??

There’s been a massive amount of outrage from audiophiles about the switch from Phil Gigante and Natalie Ross to Luke Daniels and Jill Redfield which is hugely disappointing because I’ve listened to other series that the latter have narrated, and they are both incredibly gifted performers. Granted, they had big shoes to fill; however, they were more than up to the task! The range of voices Daniels pulled off for this title’s characters was astounding, and Redfield’s impressive resume certainly helped with all facets of this tale. They deserve mad props!

FEVERBORN will be it for me. I can’t in good conscience support KMM or her writing any longer. Yes, she retracted her initial stance, but as an author with a law degree she should never have taken it in the first place.

Was this review helpful? If so, please like it on GoodReads!