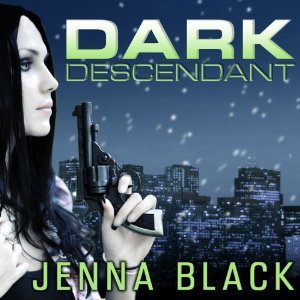 From the acclaimed author of the Morgan Kingsley, Exorcist books comes the gripping first novel in a new series about a private eye who discovers, to her surprise, that she’s an immortal huntress.

Nikki Glass can track down any man. But when her latest client turns out to be a true descendant of Hades, Nikki now discovers she can’t die...

Crazy as it sounds, Nikki’s manhunting skills are literally god-given. She’s a living, breathing descendant of Artemis who has stepped right into a trap set by the children of the gods. Nikki’s new “friends” include a descendant of Eros, who uses sex as a weapon; a descendant of Loki, whose tricks are no laughing matter; and a half-mad descendant of Kali who thinks she’s a spy.

But most powerful of all are the Olympians, a rival clan of immortals seeking to destroy all Descendants who refuse to bow down to them. In the eternal battle of good god/bad god, Nikki would make a divine weapon. But if they think she’ll surrender without a fight, the gods must be crazy...

Since the fourth book in this series is coming out this year and it has been three years since I read book three, I decided that i needed to revisit this series before I tackled the fourth book. I remembered really enjoying these series, but I started this series back before I was blogging, so I didn’t have more than a rating when I first read this book. My rating system has also changed a lot since then too.

Anyway, Nikki Glass is a private investigator. She was an orphan who knew her mother, but was left at a church when she was very young. She then moves from foster home to foster home until she is adopted by the Glass family. So, Nikki really doesn’t know much about her ancestry.

Nikki takes a case where she is to help get a girl out of a cult. However, when she is driving up to the mansion where all the cult members live, her client steps out in front of her car and she is unable to stop on the icy driveway and kills him. This is when things really go ary for Nikki. She learns that she is now Liberi. Liberi are mostly immortal. They are descendants of the gods. Only there are only so many of these immortals, and more descendants than immortal seeds. The only way to become an immortal is to kill one of the other immortals.

Nikki is a descendant of Artemis. She now has to convince the members of the “cult” that her client, Emmitt, killed himself and the she isn’t a spy from a different group of Liberi who are known as Olympians. The Olympians see themselves as much better than humans and have a very low moral compass. They also believe that only the Greek gods should be allowed to be Liberi. They will kill off entire families of non-Greek gods to prevent them from ever becoming Liberi.

I really enjoyed this story. I like watching Nikki learn how to maneuver through this new world of immortals. She is also very protective of her adopted sister, Steph, who plays a very big role in this story. Other characters that we have in this story include Anderson who leads the group of “good guys”, Maggie (Zeus), Jack (Loki), Jamal (Kali), Black (Eros) and a some others. There is also the Olympians, who we don’t learn as much about outside of Alexis and Konstantin the leader.

I will point out that there is a ton of action in this book as Nikki helps to search for missing member of Anderson’s team. She also has to defend herself as she convinces the others that she is not a spy. I will warn you. Immortals can take a ton of damage in this world. They can literally not die unless another descendant kills them. They can take a lot of abuse, which is proven several times in this book.

Narration
I listened to this book to revisit it. Sophie Eastlake is a great narrator who I’ve loved for a while. So it was no hardship to pick this up on audio. She does a great job with all the voices. Her ability to voice the sweet Steph and the hot-headed Jamal and the truly evil Alexis was just great. If you’ve never listened to Eastlake, I highly recommend her.