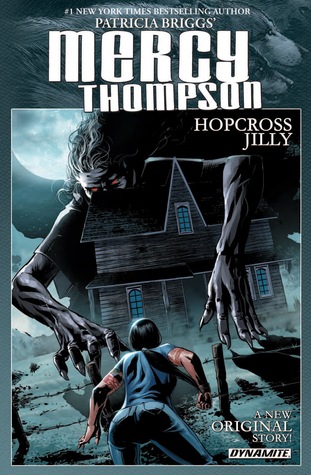 Mercy is a shapeshifting coyote and honorary member of the Tri-Cities werewolf pack. When the pack stumbles upon the buried bones of numerous dead children, she shapeshifts into a mystery of the legendary fae - a mystery that draws Mercy's stepdaughter Jesse into the fray! The supernatural romance series Mercy Thompson continues in this all-new, original story by New York Times bestselling author, Patricia Briggs, exclusively created for the comic book medium!

I’m really starting to enjoy graphic novels. I haven’t read many, but the few I’ve read I’ve enjoyed. I started off with the early Anita Blake books, most were a retelling of existing novels and one prequel new story. Then I got two new stories from Kelley Armstrong’s Women of the Otherworld. I’ve got actual comics from Patricia Briggs that are just a retelling of Moon Called. I read most of these before I started blogging, so I’ve only reviewed on graphic novel before this one, Kelley Armstrong’s Bounty Hunt. I find that I’m really enjoying them.

This is the story set in Mercy’s world, but follows Jesse as much as Mercy. It does start out with a werewolf run and the wolves come across a burial site. Mercy, being the one who has the easiest time changing, has to call it in to the cops. They continue to find more on an abandoned property.

While that is going on, Jesse is in school. She is not well liked by the vast majority of her classmates. She has a few friends, but most are scared of her because of her father. Once the news comes out about the deaths that the wolves find, the kids at school start to accuse her father. There is also a new girl that started in the middle of the school year.

This is a story with the fae. It also takes place, not only after they’ve come out, which is done before Moon Called, but also after the events of Dead Heat and Frost Burned. They are not playing nice with the humans any more. They are pretty much just not playing at all.

While this isn’t a very complex story, I was able to figure out who the villain was very early on, but I still enjoyed it. I loved seeing Jesse outside of the pack and even away from Mercy and Adam. She has a touch life at school and it made me sad for her. I loved seeing her with just Mercy. Mercy is exactly as I would see her as a stepmom.

It was a fun, but dark short story. Nothing darker than I’ve read in earlier Mercy books. If you’re a series reader and don’t want to read the comics, you won’t miss a piece of the overall story. I even think you could read the graphic novel without having read the series, though I don’t think you will enjoy as much as a Briggs fan would. I artistry of the book fits the characters. I liked seeing how the characters were brought to life. We even get to see what Zee looks like. If you’re thinking about trying out a graphic novel/comic book and are a reader of Mercy Thompson series, this would be a great book to try it out.