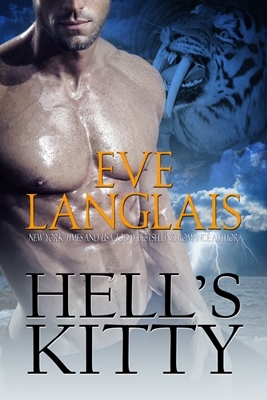 Good thing this Hellcat has nine lives because he’s going to need them if he’s going to survive Lucifer’s latest scheme and land on his four furry feet.

Okay, so Felipe ate a few of the Styx sea creatures. In his defense, they were awfully tasty. Depleting the monster reservoir didn’t mean Lucifer had to go all Lord of Hell on him and order him to go on a stupid mission. And to Siren Isle of all places! Everyone knows males should stay far, far away from that dangerous place. The only stroke of luck is the woman he’s after isn’t a siren. Nor is she quite a mermaid. As a matter of fact, Jenny isn’t like anyone he’s ever met—so, of course, this curious cat wants her.

Except he’s not the only one.

Not long after his arrival, he runs into problems, which he’s only too happy to solve in a permanent and violent fashion. Getting Jenny off the island and back to Hell’s inner circle is proving more troublesome than expected, though. Who knew a simple retrieval mission would signal the start of a dangerous—yet exhilarating—adventure, and despite his tomcat ways, this purring feline can’t help but fall in love.

Eve Langlais never ceases to amaze me with the characters that she creates. The hero in this book is a Hellcat, which was no surprise from the title. The heroine, though, that caught me by surprise. The prologue starts off with Jenny waking up as a child washed up on the Siren Isle. She has green curly hair and scales on her legs. The Sirens don’t really know exactly what she is or what to do with her. But, since they haven’t had children of their own in a long, long time, they adopt her. However, she doesn’t quite have the pipes Sirens are known for. In fact, quite the opposite. People will run off a cliff when she talks and kill themselves when she sings. Even some immortals aren’t immune.

Felipe is a Hellcat. We actually met him in A Demon and His Witch, as he was taken in by Ysabel as a stray. He was also her familiar. He has a knack of eating sea creatures out of the river Styx. So, Lucifer sends him on a mission to recruit Jenny to come help Lucifer. Jenny hasn’t left Siren Isle since she arrived, but Lucifer now wants her in the innermost circle of Hell. And he wants Felipe to bring her.

Yep, Lucifer is at it again. That demon has quite the knack for matchmaking. It has given him quite the ego too, as if he needed the boost. We get to watch how Lucifer has once again done a great job pairing up two unlikely people to make a great couple, even if it takes a while for them to figure it out. Felipe, as a tomcat, has no use for settling down, though the thought of not being with Jenny now that he’s met her drives him crazy. How could a tomcat like him ever settle down.

This is another fun story as Jenny and Felipe trek through Hell. They have some adventures. They have some fun times. There are some very good emotional times. And lastly, this couldn’t be an Eve Langlais book without laugh out loud moments. In this book, we get the most time with Lucifer’s lady love, Gaia. We also see who will be the features of the next book. Charon’s son, Adexios, who has been causing issues left and right. Plus an Amazon who helped Jenny and Felipe trek through Hell. That has funny written all over it.

I had to use this quote, even though it doesn’t feature our hero or heroine, it does feature Lucifer and his daughter Muriel.

“So once again, I’m here to save your hairy ass.”
“I’ll have you know I had it waxed earlier this week.”
Muriel wasn’t the only one to groan at this revelation. “Too much info. Anyhow— Hold on a second, is that a ducky with horns on your slicker?”
Thrusting his shoulders back, Lucifer grinned as showed off. “Yes, do you like it?”
“Only you could hope to carry if off,” was her reply.