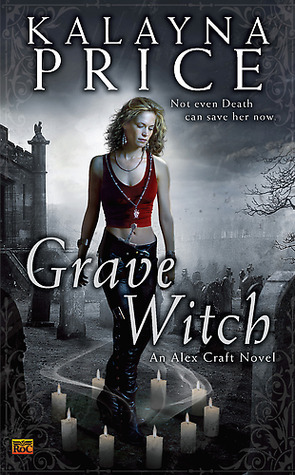 Grave witch Alex Craft can speak to the dead, but that doesn’t mean she likes what they have to say...

As a private investigator and consultant for the police, Alex Craft has seen a lot of dark magic. But even though she’s on good terms with Death himself—who happens to look fantastic in a pair of jeans—nothing has prepared her for her latest case. Alex is investigating a high profile murder when she’s attacked by the ‘shade’ she’s raising, which should be impossible. To top off her day, someone makes a serious attempt on her life, but Death saves her. Guess he likes having her around...

To solve this case Alex will have to team up with tough homicide detective Falin Andrews. Falin seems to be hiding something—though it’s certainly not his dislike of Alex—but Alex knows she needs his help to navigate the tangled webs of mortal and paranormal politics, and to track down a killer wielding a magic so malevolent, it may cost Alex her life... and her soul.

There wasn’t anything wrong with it. It just wasn’t OMG, I LOVE IT, like my memories were telling me it was. AND there were a lot of borrowed ideas I didn’t remember noticing.

Like how Alex is a necromancer grave witch who raises zombies spirits of the dead. Her ability is an embarrassment to her family, and she gets shipped off to boarding school when it becomes clear there is no hiding her magic—if she doesn’t deliberately use her gift, it will latch on random dead things of its own volition . . .

YES. That does sound familiar.

Know what else sounds familiar? View Spoiler »Falin, who bares a remarkable resemblance to Merry Gentry‘s Frost, and who is the Winter Queen’s lover and assassin.

I think it’s safe to say we have a Laurell K. Hamilton fan in the house.

Then there’s the helpful ghost who can and will go places Alex can’t, who’s just grateful not to be ignored (Night Huntress), and the gargoyle who stalks the parameter of her house and the yard of her home (The Hollows), and in hindsight . . . it’s all a little underwhelming.

Most of what’s left—a Fae friend and landlord, two girlfriends, a snotty younger sister, and an inscrutable father—is flat and underdeveloped. Even Death (the one unique element) and his feelings for Alex are just tossed out there without much effort put into the backstory.

The “snarky” dialogue also left something to be desired.

Like when Alex (a witch) crashes her father’s dinner party/political gathering for members of the Humans First party, and her parting shot is:

“By the way, George, great party, but one thing amazes me. Why is it Humans First Party supporters hate witches, but sneak in illusion charms for an instant face-lift or boob job?” Turning on my heel, I stormed out of the room . . .

I’m hoping the next installment is better. I think there’s more Fae, and now that View Spoiler »Rianna (Alex’s college roommate who disappeared) « Hide Spoiler is back in the picture, I’ve got my fingers crossed that things get more interesting.