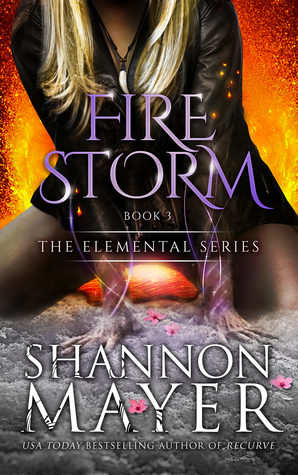 In a world of lava and fire, I am about to face my hardest trial yet. Not one of strength, or power, but intrigue and manipulation. However, my tolerance level for anyone outside of my family is at an all-time low, and the queen who rules the Pit expects complete obedience.

As Ash's life is held in the balance, I have just three days to prove his innocence and mine. This place holds more than a scorching heat; new foes, traitors, and creatures from the depths of the lava are all trying to keep us from surviving.

The only question left. . . Can I get us all out without being burned alive?

Welcome to the Pit.


It’s a good thing that Shannon Mayer’s books are calorie-free because I’d be breaking out my fat pants right about now after reading thirteen of her titles in eight months. Her writing style is irresistible for adrenaline addicts like me, and this series is even more so than her RYLEE ADAMSON novels on account of the nominal romantic thread. The only thing that ran hotter in FIRESTORM than the lava and Salamanders was the treachery.

This installment had a full house worth of plot lines with a queen out for blood after the deaths of her Enders, murdering firewyrms running rampant and cloaked figures with secret agendas. Every turn Lark took in the Pit was rife with danger, and her lack of a verbal filter certainly didn’t help the situation any either. Discovering who the real villain was proved to be as galling as navigating the mountain’s treacherous labyrinth of tunnels.

Larkspur’s evolution has been slow going, but I think that’s intentional on the author’s part. The ELEMENTAL world is a hazardous place with four powerful families competing for dominance which makes choosing who to trust the largest challenge of all. However, there was some forward mouvement where Lark’s magic was concerned that left me hungry for the next book, but also a little scared of what kind of impact it might have on the heroine’s psyche.

Mayer lured me with her action, hooked me with her protagonist, and reeled me in with her secondary characters. Ash spent most of this story locked in a cell, so that freed up space for Cactus to strut. I really don’t know which out of the two I prefer as a match for the lead; I’m just praying that no angst will be involved. Peta, Lark’s familiar, was easily my favourite ally. Her dialogue was entertaining, and I loved their relationship’s progression.

FIRESTORM brought the heat to the ELEMENTAL series!