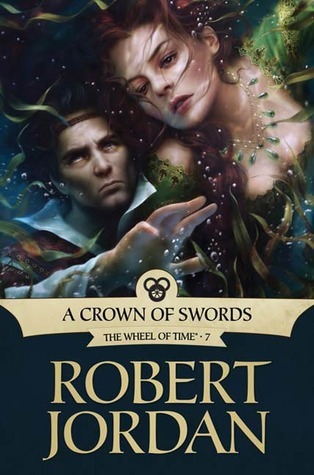 A Crown of Swords by Robert Jordan
Series: The Wheel of Time #7
Published by Tor Books
Published on: May 15 1996
Genres: Fantasy
Pages: 902
Format: eBook
Source: Purchased

In this volume, Elayne, Aviendha, and Mat come ever closer to the bowl ter'angreal that may reverse the world's endless heat wave and restore natural weather. Egwene begins to gather all manner of women who can channel--Sea Folk, Windfinders, Wise Ones, and some surprising others. And above all, Rand faces the dread Forsaken Sammael, in the shadows of Shadar Logoth, where the blood-hungry mist, Mashadar, waits for prey.

SO. A Crown of Swords was nowhere near a bleak as Lord of Chaos, but good times are still in the waaaaaay distant future.

Morgase escapes the Fortress of light, but only after enduring numerous . . . indignities that Pedron Niall shielded her from. AND her children still believe she’s dead, b/c the idea of her fleeing to Amador is ridiculous.

Elaida is still calmly and inexorably paving the way to her own downfall, and Aes Sedai are still generally blundering about, convinced of both their right to blunder and their infallibility.

Honestly, the fact that Elaida doesn’t even consider the possibility her most recent Foretelling might not herald her own triumph—there are two Amyrlins—and Bera and Kiruna blithely ignoring SORILEA, to tell Rand what he must do . . . I say they ALL deserve what they get.

With the arrival of Cadsuane in Cairhien I think all my Top Players are now on the board.

Yes, Cadsuane is Aes Sedai, but she is all that Aes Sedai are supposed to be.

Of the Green ajah, she has wrangled more men who can channel than any four Reds combined.

She once avoided the White Tower for TEN years when they tried to raise her to the Amyrlin Seat, and she turned down Sitter for the Hall appointments TWICE.

All of the faux Sedai turn into twittering school girls at the sight of her, when they don’t outright blurt, “I thought you were dead!”

B/c Cadsuane is old. Older than any other Aes Sedai in memory, so old that any day could be her last, but more than one twittering school girl muses that as long as there is a spark of adventure in the world, Cadsuane will never die.

And it’s a really good time for her to show,up, b/c Rand is losing it. Not just his mind, although that’s clearly a concern, but he’s so young to have so much responsibility, so much dependent on him for the survival (OF THE WORLD), that the pressure is starting to create stress fractures.

Min helps, but by herself, she’s not enough.

All we can do is hope he holds on long enough to learn whatever lesson Min Views Cadsuane teaching Rand and the Asha’man, a lesson so important that without the learning of it, they will die.

But that’s only a part of our story.

The other main part involves Mat, Nynaeve, Elayne, Aviendha, and Birgitte in Ebou Dar, *whispers* which is basically a women-ruled, pirate queendom.

Said women wear dresses with corset-like bodices and skirts sewn high on one side to show ruffled and colorful petticoats. When they marry, their husband gifts them a “marriage knife,” begging their new bride to plunge the knife into their heart should they ever displease them.

You can be challenged to a duel—to the death—over a look, and failure to fight duel (over a look) can lead to being disowned (b/c no mother would claim such a coward as her own flesh and blood).

I’m having a hard time remembering why Saldaeans are my favorite people group after the Aiel, b/c Ebou Dari are pretty epic too.

Might my love of this installment have something to do with a certain Ebou Dari Queen claiming a certain rapscallion as her “pretty” and stalking him with a fiendish determination much like his own when in the prowl . . . ?

Then there’s all the other awesomeness I can’t specifically mention b/c spoilers.

But I can say this . . . If you’ve been waiting for a certain stone-faced Warder to make his way back to a certain bristly village woman . . . this is your book. *winks*

Regardless, A Crown of Swords is another spectacular chapter in the WoT saga. A Path of Daggers, here I come.

4 responses to “Review: A Crown of Swords by Robert Jordan (@jessicadhaluska)”