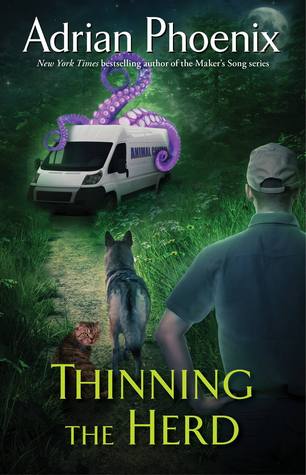 From the New York Times bestselling author of A Rush of Wings and The Maker’s Song series, a humorous, action-packed urban fantasy about a werewolf pack and an animal control officer in way over his head!

Someone is picking off fortune tellers and hippies in Oregon, snatching them out of their Birkenstocks mid-stride. And when the legend himself, Hal Rupert, Animal Control Officer, gets a whiff of the mystery, he knows he’s the man to solve it. In between proudly wrangling out-of-control cats and dogs, he’s noticed a peculiar uptick in another sort of animal…werewolves.

Hal infiltrates the country fair to investigate the disappearance of the flower children. But his real priority is protecting the love of his life, Desdemona Cohen, whose long purple tresses and black-glossed lips captured his heart the moment he first saw her standing behind the register at Hot Topic. Desdemona may have nicknamed Hal “Creep,” but he’s determined to win her heart. And, you know, save everyone else, too.

I wouldn’t want to binge read this particular kind of book because the humour would get old fast, but as an occasional break from the norm, it’s a good pick. The story is told from Hal’s seriously skewed POV with blips from other characters (i.e. reality) he comes into contact with, and the outcome was gosh darned funny! The flow was somewhat disjointed though which made it confusing at times. That being said, I wouldn’t hesitate to check out the next installment if Adrian Phoenix decides to turn this into a series.

THINNING THE HERD revolved around a farfetched mystery peppered with cartoon-like personalities, and a stalkerish romantic thread. In other words, the author set out to exaggerate every component of this novel to high hell, and she absolutely owned it! If you approach this title with a go-with-the-flow attitude, and just look at it as pure entertainment, then you’ll find the experience rewarding, but if you don’t fall into that category you might want to back away now.

I really enjoyed shadowing Oregon’s Animal Control Officer at his day job; he’s definitely in his own little bubble, and it was a riot seeing the world through his rose coloured glasses. Hal is under the impression that he’s this big league superhero, everyone knows his secret identity, and that peps purposefully “pretend” they’re oblivious *wink-wink nudge-nudge*. Also, according to Rupert, he & Desdemona are super tight when in truth she’s actually seconds away from filing a restraining order against him. Aaah, young love.

Nick, the werewolf, and Galahad, the yōkai (cat shifter), were lively sidekicks, and the plot was pretty decent too until it seemed to get away from Phoenix for a bit. The protagonist up and went for a walkabout while the secondaries were fighting for their next breaths, and the leaps between possible Big Bads and their motivations were overly unchained for my tastes. I understand that the story was intended to be cray-cray; however the core structure still needs to be sound IMO.

THINNING THE HERD is best served with wine and lotsa CHEESE.