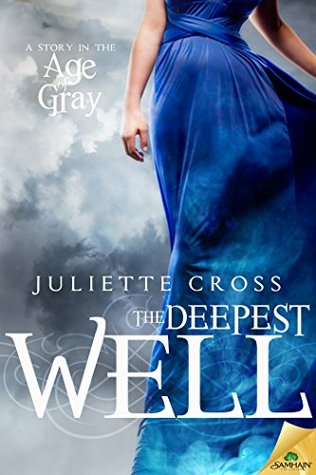 Love can stand the test of time. Can it rise above the taint of Hell?

Lady Katherine Blakely is married to a monster. On the same night she witnesses how low her husband can sink, she meets a charming stranger, a gentleman from top to toe. Yet even her gallant rescuer is possessed of a dark side.

Lord George Draconis Thornton, commander of the Dominus Daemonum, is on a mission to expel the demon prince Damas back to the underworld. But a golden-haired beauty derails his plans and stirs an attraction he’s never felt before, not even for his centuries-dead wife.

Discovering Lord Blakely is in league with Damas, George sweeps Katherine away from the chaos and devilry threatening her life. With every touch, their love grows by joyful leaps and bounds.

Sensing his enemy’s vulnerability, Damas kidnaps Katherine to his hellish lair, where he wages a sensual assault on her defenses. As George tears at heaven and earth to find her, he is painfully aware of only one way to save her soul. The cost will break her heart…and destroy his own.

Warning: Contains wolves in gentlemen’s clothing, a precipitous descent into Hell, and a frightening glimpse of a post-apocalyptic world where angels and demons wage war for dominion on earth.

When I started reading THE DEEPEST WELL by Juliette Cross, I didn’t know what to expect. I’d been interested in reading her books for awhile, b/c tons o’ Goodreads friends love her (including book bff), so I jumped when I was offered an opportunity to read it for review, and then . . .

The first few paragraphs read like something from a Jane Austen novel.

Katherine Blakely was coaching herself into her public face while silently despairing her situation—married to and at the complete mercy of a man who was a “monster.”

And this is PNR, so I took that literally. I figured he was a werewolf with an insatiable sexual appetite, probably a Scotsman, and this blushing miss was about to have an Awakening.

Then Katherine walked downstairs, ready to attend a party with Monster (who was only a monster behind closed doors *waggles eyebrows*), when she notices the quiet and absence of servants.

Quiet except for vague sounds she hears coming from Monster’s office . . .

Through the open door she sees her husband with one of the servants bent over his desk . . . and I realized we were dealing with a different kind of monster.

I shouldn’t have liked this book. I’m kind of baffled that I did.

After the Monster Incident, I went back and reread the synopsis—I’d skimmed it months ago, but I didn’t remember anything—and what I found left me with MAJOR misgivings.

I hate cheating. The only reason it’s not #1 on my list of RULES, is b/c it’s so seldom an issue in the books I read.

But if I primarily read contemporary romance, it’d be Rule #1. And not only did the main couple come together through cheating, but Dollface is kidnapped by Cool Guy’s enemy who “wages a sensual assault against her defenses.”

What does that mean?

Convincing myself it was some kind of metaphor (or something), I determinedly kept going. Monster was in fact a monster, as far as I was concerned, so I was already open to the possibility that the cheating wasn’t really cheating . . .

But I didn’t care.

B/c MONSTER. Also b/c of a spiel about the polite world vs. the world Katherine was actually existing in. *tips hat*

BUT. Then the kidnapping.

Black hole of my emotions:

The reason this book works is b/c it takes place over hundreds of years. TIME is the answer. It made everything not only believable, but I understood it.

It broke my heart.

But it broke my heart b/c it was real.

Then TIME put me back together again.

“I’m just like that flower. The cinquefoil.” She reared up on her elbow, cupping his jaw. “I was torn apart. But you, my knight, you found all the pieces and put me back together.”

Just like TIME also put Katherine and George back together.

THE DEEPEST WELL was my first book by Juliette Cross, but it will not be the last. While I’m fairly certain it’s a spinoff from her other series, I didn’t feel lost or left behind, so if you’re also a Cross newbie, have no fear of jumping in with both feet, and if you’re a longtime reader, I have a feeling you’ll be VERY pleased with this story . . . George seems like a pretty important guy to the cause.

As for me, I already have three of her other books downloaded onto my kindle, so I’ll see you guys later. MUCH later. Highly recommended.