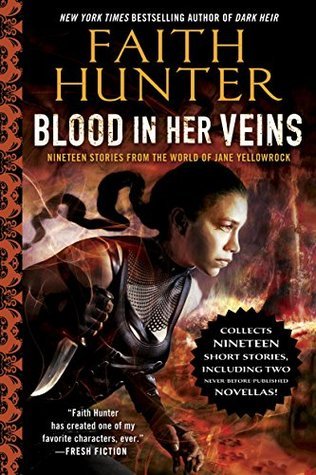 In this must-have collection of stories, experience nineteen thrilling adventures from the world of vampire-hunter Jane Yellowrock, including many fan favorites and two all-new novellas. Read about the first time Jane put the pedal to the metal in “The Early Years,” and the last thing a werewolf will ever see as Jane delivers justice in “Beneath a Bloody Moon.” Get a searing look into the pasts of some of the series’ best-loved characters: Beast in “WeSa and the Lumber King,” Rick LaFleur in “Cat Tats,” and Molly Everhart Trueblood in “Haints.”

In the brand-new “Cat Fight,” the witches and vampires of Bayou, Oiseau, are at war over a magical talisman—and Jane must figure out how to keep the mysterious artifact out of the covetous hands of the Master of New Orleans. And in the never-before-published “Bound No More,” Jane welcomes a visit from Molly and her daughter, Angie, who is about to prove she’s the most powerful witch in Everhart history....

From the Big Easy to the bad bayou, from the open road to a vampire’s lair—with Jane Yellowrock, it’s always a given: have stakes, will travel.


Before we get into this:

1. If you’re new to JANE YELLOWROCK, proceed with CAUTION. I will not intentionally spoil anything, but this collection includes NINETEEN stories about events that take place both before and throughout the main series.

If you’re curious, check out my review of Skinwalker. It’s safer. And enthusiastic (b/c LOVE Jane).

2. I’ve been slack on keeping up with Jane lately, b/c stubbornly waiting for the European vamps to get here, so I’m reading a lot of the recently written stories for the first time—the older stories from HAVE STAKES, WILL TRAVEL and CAT TALES I’ve read several times now, and I read BLACK WATER when it first came out.

So my opinions on Big Deal situations in the main series are evolving. *coughs* Bruiser *coughs*

3. I hate Rick with the fire of ONE THOUSAND suns. My reviews of his POVs reflect that. FYI.

FIRST, I’m not sure there’s a more perfect example of Beast vs. Jane than this one:

Night vision came as sunlight left. Earth turned into silvers and greens and grays. Liked this time of day/ night. We sa called it beautiful. I called it safe.

If you’re a longtime reader of Jane, you know there are periodic references to the Hunger Times. This is a (very) short story from Beast’s POV as she tries to get rid of the humans destroying her natural habitat.

We also get a peek at baby Jane, who hasn’t yet found her way back to human form after melding with Beast.

An 18-year-old Jane follows an instinct she doesn’t understand and finds her way back home. It gives me FEELS.

Oh, look. Ricky Bo got himself in trouble b/c chasing tail. SHOCKER.

This one’s told from Rick’s POV, and if you’ve been curious about how he got his mountain lion/bobcat tattoo:

Rick didn’t know what it meant to have the cats here on his body, beneath his skin, part of him.

I like this one b/c lot and lots of PAIN for Rick (whom I HATE).

KITS hits me in ALL the FEELS, and it’s probably my favorite Jane short to date.

1. Beast and kits always plays havoc with my emotions. She’s so fierce and so pure and so . . . single-minded. Nothing is more important than kits. *rubs fist over heart*

2. The birth of Molly and Jane’s friendship:

I pulled on my socks and carried my boots into what was left of Molly’s house. We had tea. We shared secrets. Weirdly, Molly held my hand while we talked, as if protecting something fragile or sealing something precious. Even more weirdly, I let her. I think that, for the first time in my life, I had a real friend.

I may have cried. A lot.

HAINTS is one more reason why vampires and witches shouldn’t mix. o.O

This one is told from Molly’s POV, which is awesome b/c we get to see Jane through her eyes (ALSO b/c Molly). Evan is on hand as well, and as he’s not hating on Jane, that’s fun, too.

You know that job Jane had prior to hitting New Orleans? The one where she nearly got her throat ripped out? The one where some kid got her on video with her eyes glowing?

This is that story.

It’s not pretty. But dealing with rogue vampires rarely is.

Good thing we have Jane.

Have I mentioned that I HATE Rick? B/c I do.

This one is from Rick’s POV, and it details his first full moon as a were . . . A were unable to shift b/c witchy tattoos. It appears to be rather painful.

And I would’ve given it full marks if it hadn’t been for his, “Woe is me, I really effed things up with Jane,” and, “I really need to talk to her, I need to explain,” crap and trash.

View Spoiler »Stay the fuck away from Jane, you ASS. « Hide Spoiler <—–not a spoiler, just me cursing at Rick (spoiler tagged out of respect for Jane who hates potty mouths).

I’m still #teamjane but now I’m closer to #teambruiser than I’ve been since that limo ride in one of the first books . . . youknowwhatimtalkingabout *fans self*

Short story from Rick’s perspective. Takes place during his training with PsyLED.

This one is a Hatfields and McCoys scenario played out by vampires and witches in the bayou. Jane gets tricked into helping moderate a dispute, and by “tricked” I mean clocked with a heavy object.

Pretty standard as far as these types of things go, BUT most of the involved parties have fantastic Cajun accents, and I do love me a good Cajun accent.

This one was told from the POVs of two of the Everhart sisters, Elizabeth and Boadacia. It takes place after the big Evangelina showdown, and tensions are still running high.

When their high school nemesis shows up of the family restaurant, as much as Liz and Cia would like to send her packing, they end up agreeing to help her find her mother who’s disappeared.

They find themselves over their heads and call in Jane who just happens to be in town, but in the process of working their magic, absorb another witch’s blood magic . . . The same kind of magic that made Evangelina go CRAY . . . The effing end. *shakes fist*

If Faith Hunter has a flaw, it’s overusing concepts and/or revamping (HA!) ideas that have previously been treated as unique.

We know from MERCY BLADE that werewolves are cursed with both madness and an inability to create female werewolves. Which was why Magnolia Sweets was such a Big Deal.

Yet in this story, what are we dealing with?

Another female werewolf. *sighs* And the way the story plays out, we never get an explanation for HOW she exists or what the deal is with the inexplicably HUGE dire werewolf.

Feeling responsible for the kidnapping of two women (b/c the kidnapper busted out jail seeking revenge after someone on Jane’s team killed his werewolf sister), Jane enlists the help of Sarge (from BENEATH A BLOODY MOON) and his monster dog in a rescue mission.

I want to know 3 things:

1. How is it exactly that Sarge is sane?
2. How are Sarge and Christabel able to communicate with monster dog?
3. WHAT THE BLOODY HECK IS CHRISTABEL??!

At Dragon Con 2014 (and 2015), I went to a bunch of Faith’s panels. In one of them she talked about a new series she’s working on. I was excited about this for numerous reasons, the two biggest being:

For those of you that don’t know, Oak Ridge is in Tennessee, near Knoxville. It’s also where the first atomic bomb was made.

One of my dads has lived in Andersonville, part of the same county that Oak Ridge is in, for about 20 years, and has been working at Y-12 for the last 6 or 8 years.

I am fascinated by this place.

I have been fascinated by this place since I was a teenager.

In this story we meet Nell Nicholson Ingram, who is the heroine in Hunter’s new series. I’m not sure what she is exactly, but my money’s on her having some kind of Fae in her ancestry, and the only thing I love more than Native American folklore is the Fae.

GIVE IT TO ME NOW.

This was a Molly POV, so I was already inclined to like it, but, man alive . . . Every time I think vampires are wholly unredeemable, every time I’m ready to write them off completely (b/c reprehensible, elitist, devious, hedonistic, disgusting creatures), something has to go an throw me for a loop.

This time it was Lincoln Shaddock.

I really like the Asheville vampires. Against my better judgement, but all the same . . . I like them.

CAT FIGHT sends Jane back to bayou, b/c the vamp/witchy version of the Hatfields and the McCoys aren’t playing nice any longer.

Our star-crossed lovers are behaving like children, Shauna stealing a valuable magical artifact from her father-in-law and running home to her Mama and Daddy . . . Then the Vatican gets involved, and basically it’s a big ol’ mess.

We get some more insight into Edward (which makes me not-worried for Leo, the control-freaky jackhole), and Gee also makes an appearance (I LOVE Gee), so, yeah, it was great.

Boy howdy, Angie Baby is gonna be hell on wheels when she hits adolescence . . . o.O

In this final tale, Molly is in town with Angie for the Witch/Vampire parley, and that light dragon thingy is out for Molly’s blood. If you want to know why, READ THE BOOK.

Point of interest: the thing that put me off so badly in DARK HEIR—Jane continuing to dothething when it had been established that if she didn’t stop, it would KILL HER—was explained better, so I’m okay with it now . . . Either that or I’ve had enough distance to get over it. *shrugs*

SO. Should you read BLOOD IN HER VEINS for yourself? Only if you love Jane. And if you don’t love Jane, GET OUT! what are you doing here? Highly recommended.

5 responses to “Review: Blood In Her Veins by Faith Hunter (@jessicadhaluska, @HunterFaith)”