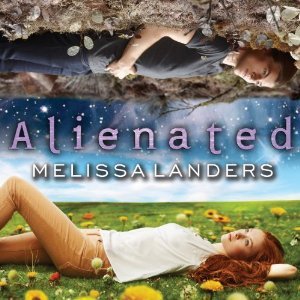 Two years ago, the aliens made contact. Now Cara Sweeney is going to be sharing a bathroom with one of them.

Handpicked to host the first-ever L'eihr exchange student, Cara thinks her future is set. Not only does she get a free ride to her dream college, she'll have inside information about the mysterious L'eihrs that every journalist would kill for. Cara's blog following is about to skyrocket.

Still, Cara isn't sure what to think when she meets Aelyx. Humans and L'eihrs have nearly identical DNA, but cold, infuriatingly brilliant Aelyx couldn't seem more alien. She's certain about one thing though: no human boy is this good-looking.

But when Cara's classmates get swept up by anti-L'eihr paranoia, Midtown High School suddenly isn't safe anymore. Threatening notes appear in Cara's locker, and a police officer has to escort her and Aelyx to class.

Cara finds support in the last person she expected. She realizes that Aelyx isn't just her only friend; she's fallen hard for him. But Aelyx has been hiding the truth about the purpose of his exchange, and its potentially deadly consequences. Soon Cara will be in for the fight of her life-not just for herself and the boy she loves, but for the future of her planet.


I am not a huge science fiction fan of the outer space kind of way. I have liked some romances featuring humans and aliens in the past however. This book, although young adult, fit the bill as far as a fairly good romance. After seeing it everywhere, I snapped this up from Audible and just recently got to finally listen.

Cara Sweeney is a teenager driven to succeed; she works until she receives the honor of being valedictorian of her senior high school class. Little does she know that it comes with an honor of another sort. In this world, the planet L’heir had made contact with Earth a couple of years before. Human’s are very similar to L’heirs inhabitants with some big exceptions. Their people are light years ahead of earth in technology and in travel as well. Cara’s honor is that she will get a full ride to her dream university, if her family will take in one of three exchange students from L’heir. Initially not wanting to do it, Cara finally accepts, much to her boyfriend’s dismay. As for the alien, Aelyx is super good looking, but doesn’t want to be touched due to the lack of touching on his planet. It makes him uncomfortable and it doesn’t help that Cara’s family is so touchy feely and loving-something he has never known on his planet.

It was fun seeing Earth through Aelyx’s eyes. Or through Cara’s as she befriends him and walks him through everyday life. But of course, people are not liking the fact that Cara’s family is sheltering an alien. To them, they think he is all part of a scheme by the aliens to take over earth. This brings me to the social commentary part of this. When groups are formed to try and get Aelyx and his friends-both of which are in other countries-thrown off earth, or worse killed, life for Cara and her family is turned upside down. Bigotry in any form, is still bigotry. When Cara and Aelyx fall in love, things get even more heated up-both in their relationship, and by the haters in the town.

I enjoyed the narration by Madeleine Lambert, and I thought she did a good job with changing up the voices. Her male voices were well done as well. At some points Cara’s voice sounded impossibly young for a seventeen year old, but mostly was spot on. I will be listening to the next(and last) book as well, hopefully.

Of course, this is a young adult book/listen. Even so, I did enjoy it for the most part. I did have a few problems with Cara’s parents in the end part-they were more accepting of things that happen than most parents ever would be. I found the world building for L’heir to be pretty fascinating, as well as Aelyx’s view of our world. The romance was actually pretty intense at times, although no actual sex takes place-but some fooling around definitely does! For that reason, I would recommend this to young adults 16+ to adults. Good listen!