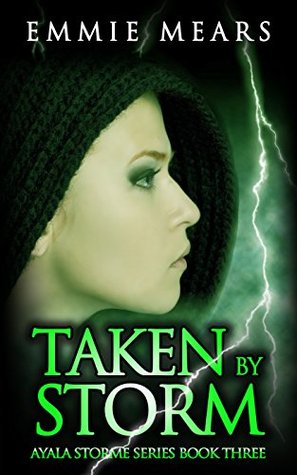 Stripped of her Silver Scale, made a pariah by the Summit, and with a price tag the size of Kentucky on her head, Ayala is on her own. Gregor Gaskin is still missing, and when Ayala discovers he’s far outside the Mediator territory line, she will unravel more about the Summit than she ever thought possible. Finding Gregor will take her far from home, but catching him might hit her right where she lives — and Gregor’s plans may just release hell on earth before she can stop him.

The first two books in this series featured fascinating characters, almost non-stop action, and were total thrill rides. Both were five star reads for me. Did this one measure up to the others?Absolutely!

Ayala Storme is a mediator(demon killer)that works in Nashville. Or rather she did until she got blamed for everything bad that has been happening, including being in cahoots with her old mentor, Gregor. Of course it’s all a crock, but Ayala now has to fight to find Gregor before he manages to continue his evil plan to ruin the world and release more and more demons onto earth. To that end, there are new Shades being born, ones that aren’t near as human as the original shades. Shades are new creatures that are part demon/part human, and now Ayala finds herself more connected to the shades than ever. She takes her shade friends and moves to Kentucky to try and stay off the Summit’s(home of the mediators)radar. When she finds out that Gregor is in Seattle, things get really interesting. And that’s because mediators literally can’t leave the area that they are born in, which is why the farthest Ayala can move is to southern Kentucky. Gregor being able to go across the country is a mystery that needs to be solved on top of everything else that’s going on.

If I had to pick a couple of words to describe Ayala, the first one would be real. The second one would be honorable. Real, because with her, what you see if what you get. She doesn’t have secrets, or a big bad mystery in her past. She is just a good person that cares about the people of Nashville and her friends. After being taken from her parents at birth due to the color of her eyes that mark her as a mediator, the few friends she has are important to her. Honorable, because her entire life centers on her work as a mediator. Killing demons is all she knows. Don’t get me wrong, she’s not a goody two shoes. She’s got a bit of a potty mouth at times, and don’t get me started on her mind and all her snarky thoughts! Her closest friend, Mira, a fellow mediator, is by her side throughout the read, along with her brother Evis(a shade),and several other shades, as well. The camraderie between them all was one of my favorite things about this read, although it’s pretty tense most of the time.

So much happens in this read. As with the others, it was full of action, demon killing, deaths, and literally fighting for their lives. There’s so much treachery coming from Gregor and his cohorts, that there are surprises at every turn. It doesn’t help that most of her fellow mediators are trying to kill her. An unexpected character does come back into the story. A very welcome character in my mind, but maybe not so much for Ayala. There’s even a hint of a possible romance for Ayala. Maybe.

Fascinating premise, fast paced, and well written with fully realized characters, this book was every bit as good as the last two. This series is definitely going to be an auto buy for me from now on.