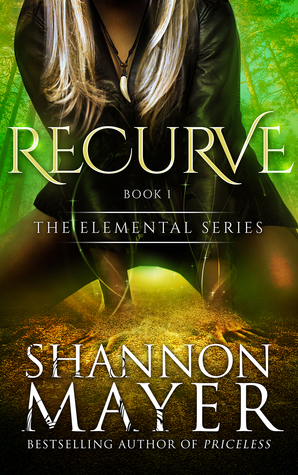 I've been accused of attacking the queen, my wicked stepmother, and my life is suddenly on the line. I have only two options left to me: banishment, or training to become one of the King's Elite Guards, an Ender.

Option one will kill me.
Option two is meant to break me, but is the only way to survive.

Did I mention I have no power like the rest of the elementals, and my connection to the earth is worth next to nothing?

Could things get any worse? Of course they can. Welcome to being an Elemental.

My desire to one-click Shannon Mayer’s Elementals grew with every RYLEE ADAMSON installment I read until Larkspur’s character was officially introduced in several novellas as well as book 9 which also happened to be the point where I finished playing catch-up on that particular story line, and what ultimately prompted me to take-up RECURVE. This title unfolds thirty some years prior to PRICELESS, so if you were hoping for continuity (like I was), you’ll be bummed at first, but happily that feeling will be short lived.

There are a couple of treasured series about Elementals that already call my shelves home therefore I had a few minor concerns about world-building overlap. Mayer quickly demonstrated why this was her rodeo though by adding a fifth power type to the customary four, channeling certain aspects Fae royalty, and having one of her RYLEE ADAMSON secondaries throw his lot in with Lark’s. There was also a slight variation to her half-breeds that helped to further differentiate her style, and a handful of unique concepts which were one-of-a-kind.

Larkspur didn’t immediately emanate “Urban Fantasy heroine” like this author’s previous female lead did, but in a lot of ways this was a more robust book 1 due to a number of reasons. The flashbacks were vital in setting the tone and in establishing the Big Bad, and the Enders training played an important role in expediting Lark’s evolution from Seeder to Princess. By the wrap-up, the protagonist had already made great strides, most of which were accomplished with minimal to no powers, so now that the magical block is toast, things should heat up significantly.

No characters have felt the weight of Mayer’s axe yet, other than the usual collateral damage; however, picking who to ship for wasn’t exactly straightforward. Allies transformed into foes, and villains into friends at every turn, so identifying who’ll survive this author’s machinations is anyone’s guess. I liked Ash quite a bit, and Granite was pretty copacetic too… until he wasn’t. Cassava’s still at large, and we’ve only examined Earth in any amount of detail which means that THE ELEMENTAL SERIES is just getting started.

Shannon Mayer has me even further in her thrall now thanks to RECURVE.