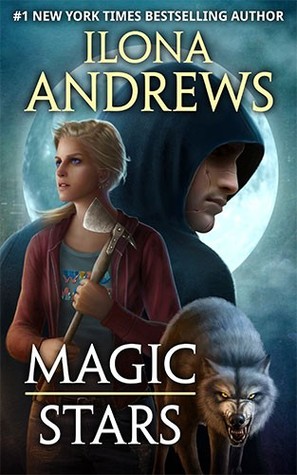 Derek Gaunt has no family and few friends. Scarred, solitary, he is the lone wolf who separated from his pack. When those close to him are murdered, he’ll stop at nothing to hunt their killer through magic-drenched Atlanta.

Soon Julie Olsen joins him and what begins as revenge turns into the race to save the city. Their search puts them against powers they never imagined and magic so old, it predates history. It may cost Derek his life, but there are things for which even he would risk everything.

A few things to know in advance:

1. You CANNOT skip this novella. I’m not saying that b/c LOVE the Andrews (which I bloody well do). I’m saying that b/c at least THREE major events take place in this book.

2. We finally get in Derek’s head. A lot of you have been concerned about Boy Wonder for awhile now. As the series progresses, he gets more and more withdrawn, more and more . . . cardboard. This is worrisome. We know the circumstances surrounding his entrance to the Pack, and, just like his face since the rakshasas got ahold of him in MAGIC STRIKES, they aren’t pretty.

What we didn’t know is how much harder he struggles for equilibrium than the average shapeshifter. How useless he feels now that he can no longer charm important information out of persons of interest for Pack security. How he’s reconciled himself to a Lone Wolf’s existence.

In MAGIC STARS, we learn all that and so much more.

3. We learn what Julie’s been up to. Besides learning to wield tomahawks and occasionally hanging out with Roland when Kate’s not looking.

Dollface has been BUSY.

Our story opens with Derek ambushing a group of men who killed a family Kate and co. did business with. It’s only his desire to know why these men murdered the Iveses that keeps him from slaughtering ALL of them as soon as he kicks their door down.

They were mercenaries hired to retrieve a rock for a warlock named Caleb Adams.

But they didn’t recover the rock. *whispers* Maybe b/c they killed the Iveses rather than asking them where it was. Eejits.

Whatever. Derek heads back to the Iveses’ home to look for it himself—If Caleb Adams wants it, Caleb Adams isn’t going to get it.

Caleb Adams is goin’ down.

Where does Julie come into all this?

Read it and find out. Suffice it to say that this is definitely a team effort, and, man alive, do they make an excellent team. *waggles eyebrows*

But none of that matters, b/c you have to read it anyway.

So get current. *winks*