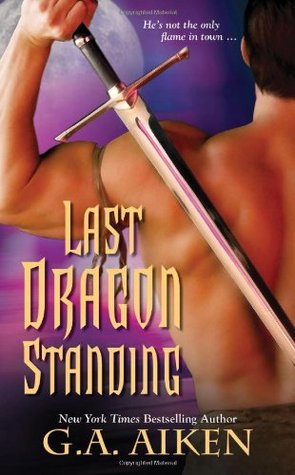 I know what they see when they look at me. The charming, soft-spoken dragoness bred from the most powerful of royal bloodlines. A disguise strong than any battle shield that allows me to keep all suitors at tail's length. A technique that's worked until him. Until Ragnar the Cunning, handsome barbarian warlord and warrior mage from the desolate Northlands. Unlike those who've come before him, he does not simply submit to my astounding charm and devastating smile. Instead he dismisses me as vapid, useless and, to my great annoyance, rather stupid.

Yet I'll allow no male to dismiss me. Soon he'll learn my worth, my many skills, and the strength of my will. For this one challenges me enough to make me want to ruthlessly taunt him, tease him and, finally, when the trap is set, bring him to his knees.

I have been away from The Dragon Kin series for a little while. Earlier this year, I picked up a eARC of Dragon on Top prequel novella and it reminded me that I needed to get back into this series. Reading this book reminded me exactly why I love this series. This book brought me back to the group of characters that I fell in love with to begin with.

Keita the Viper is the youngest daughter of Rhiannon and Bercelak. She is known for her bitchiness and the fact that she had no issues with spreading the wealth when it comes to her lovers. As a matter of fact, she prefers to limit the number of times she sleeps with anyone. Men, especially dragons, get a little obsessed with her.

Ragnar the Cunning is one of the lightning dragon from the north. He has a history, not a sexual one just a friendship, with Dagmar aka The Beast. He is a very intelligent dragon, in a clan that values strength more than smarts.

Eibhear the Blue has been up training with the lightning dragons. He was another one that I loved spending time with. At the beginning of the story, the lightning dragons are annoyed with him and his incessant talking. He really comes into his own in this book. I can’t wait to see when we will get his story.

I don’t remember Ren of the Chosen, if he was in a previous book. I really like him though. He is a very interesting dragon from the east. He is also Keita’s best friend and has been with her on her travels for years.

This is a fun story. We get to watch Keita prove that she is more than just the slut that many think she is. We watch as she shows how she has spent years on the outside as she works undercover as a protector of the throne. She has been away from her family for many years while she is doing this job. There is romance, but it was slow building between Keita and Ragnar.

We also get to spend time with many of the previous characters from the series. I loved seeing Dagmar again. She is still my favorite heroine. Annwyl the Bloody and her dragon husband Annwyl the Bloody have a large part in this story. Not to mention, their two children who were great.

This series continues to be a series with wonderful characters, and a lot of them. It has amazing world-building. It is full of snark, mayhem and hilarity. I love that while we not only had a slow burning romance, but also the ongoing story with the rest of the characters that I’ve come to love. If you’re looking for a fun and hilarious story and haven’t tried the Dragon Kin series, I highly recommend it. I will be continuing it. My plan is to get completely caught up in 2016.