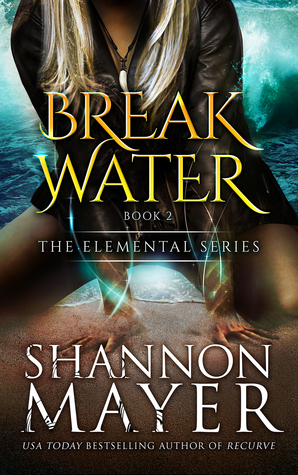 As an Ender, one of my father’s Elite guards, it’s my job to do as I’m told. When my older sister is sent as an ambassador to the realm of the water elementals--the Deep--I have no choice but to accompany her as her bodyguard.

With the death of the water elemental's King, a deadly battle for the throne begins; a battle we are forced to choose sides in.

There are only a few things I know for sure. The ocean may be beautiful, but lurking in its depths are monsters to fear, the water I tread is teaming with danger and I am on my own.

With no one to help, and no one to trust, I have to find a way to keep my sister safe, and stop a civil war.

But the secrets within the Deep are far darker than any of us realized.


BREAKWATER was a twisty, come-out-swinging book that really propelled this series and its characters forward in a big way. The first installment revolved around the Earth Elementals which by their very definition made them less alien than the Undine so, in volume 2, Shannon Mayer was able to fully let her creative cat (Peta) out of the bag by initiating readers to the secrets of the Deep.

Belladonna didn’t exactly leave me with a pleasant taste in my mouth after RECURVE, so she had a lot to prove as far as this story went. The author handled her evolution from prissy Princess to tactful Ambassador with grace, and even mended the rift between the sisters much to my delight. Likewise, Mayer also added new layers to the protagonist’s relationship with Ash that left me equally content.

I enjoyed the politicking a great deal in this novel what with the battle for the throne, the delicate maneuvering by the other Elementals, and the advancement of this series’ larger plot arc. Seeds of doubt were planted on all sides which converted the ending into a fun puzzle to be solved. Requiem was a treacherously evil antagonist that just wouldn’t die, and I loved every minute of his reign.

The Deep lived up to its name by emphasizing the constant fear of drowning, uncovering the monsters that dwell in the deepest, darkest parts of the ocean, and exposing the nastier aspects of Undine society. If you’re familiar with this author’s other works—be on the lookout for a Tracker holler—then this advisory is not required, but for the rest of you… This book touches on slavery, rape, and many violent deaths.

Shannon Mayer unleashed the Kraken in BREAKWATER, and her name was Olive. 🙂