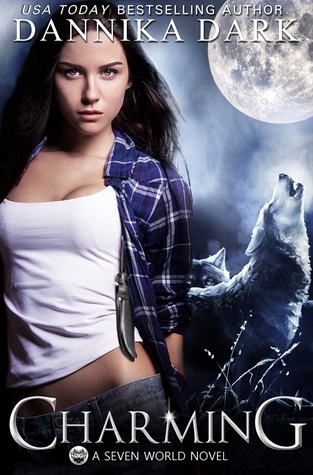 After seven hundred years, Prince has acquired everything a Packmaster could desire. But when he meets the enchanting Nadia Kozlov, he realizes there’s one thing he doesn’t have: answers. Prince owes his life to a man he hasn’t seen in centuries, and Nadia holds the key to his whereabouts, because that man is her father.

Destinies collide when Nadia’s sister shows up unexpectedly. Katarina is a skilled bounty hunter, hot on the trail of a nefarious outlaw who turns out to be Prince’s old nemesis. Prince teams up with Nadia’s sister to track down the Mage, but the real game of cat and mouse is already underway as sparks fly between Prince and the cunning bounty hunter.

The only trouble? Nadia wants him too.

In the Seven series timeline, this full-length novel is 6.5. However, Charming can also be enjoyed as a stand-alone.

Charming. Sounds kind of like a fairytale doesn’t it? I knew it was going to be about Prince, a character from this author’s Seven Series, but really wondered about the name. It ended up being the perfect title for this absolutely charming, Seven World novel.

Prince has never been a favorite character of mine, especially since he figured prominently in Two Minutes, and not in a good way-at least not in my mind. However, that being said, I absolutely adored his character in this book. In previous books, he was always the perfect gentleman, and of course he is a wolf shifter, but that doesn’t keep him from exuding class from his pores. He’s ancient, even for a shifter, is of the purest werewolf blood, and is considered royalty among wolves. It’s that blood that has kept him alive so long, and that life has been pretty lonely for him without a mate. In his quest to find someone of royal blood to mate with, he meets Nadia through his association with the Weston pack. Nadia ends up being pretty boring and all about perfection, but when he meets her identical twin sister, Katarina, all bets are off! Kat is everything Nadia isn’t, and not anything he ever thought he would ever want. But, oh does he want her! She became for me, one of my favorite female characters that this author has ever written.

Prince, a rich and powerful packmaster, paired with a leather clad, female bounty hunter is a surprising combination, but it actually works. Kat says what she thinks, and she really doesn’t care what others think-or tries not to anyway. Beneath that tough exterior though, she does have a soft heart. She is very loyal to her family, sometimes to her own detriment. And she also takes the word clumsy to another level entirely. This made for some humorous moments in this read.

As with anything this author writes, there is plenty of action to be had. After enlisting Prince’s help in finding her father, Kat gets him involved in all sorts of fun/scary moments. Romance? This read ended up being a wonderful romance. If you have never read anything by Dark, and you love paranormal romance and/or urban fantasy, you really must try her books. They are sexy, without being erotica, and never, ever feature cliffhangers-which I completely appreciate! This particular book is a standalone, but Seven Series readers will recognize a couple of characters from previous books-always a plus for me in a read.

If I had one thing to say even slightly bad about this read, it’s that it is too short. It’s a full length read, I just wanted more, as I do with anything this author writes. It’s very well written, but towards the end, I think a couple of scenes could have been shown, rather then told about. And that just goes back to me wanting more of the story, because I am greedy when it comes to Dark’s work.

Wonderful characters, interesting premise, and fast paced, this book will capture your interest, and not let go. Highly recommended to all adult paranormal romance readers.