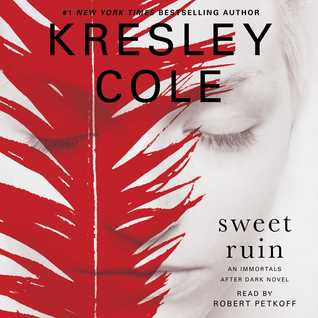 An immortal assassin is caught between desire and duty in this sizzling new novel from Kresley Cole’s #1 New York Times bestselling Immortals After Dark series.

A foundling raised in a world of humans
Growing up, orphaned Josephine didn’t know who or what she was—just that she was “bad,” an outcast with strange powers. Protecting her baby brother Thaddeus became her entire life. The day he was taken away began Jo’s transition from angry girl…to would-be superhero…to enchanting villain.

A lethally sensual enforcer on a mission
Whether by bow or in bed, archer Rune the Baneblood never fails to eliminate his target. In his sights: the oldest living Valkyrie. Yet before he can strike, he encounters a vampiric creature whose beauty mesmerizes him. With one bite, she pierces him with aching pleasure, stealing his forbidden blood—and jeopardizing the secrets of his brethren.

A boundless passion that will lead to sweet ruin…
Could this exquisite female be a spy sent by the very Valkyrie he hunts? Rune knows he must not trust Josephine, yet he’s unable to turn her away. When Jo betrays the identity of the one man she will die to protect, she and Rune become locked in a treacherous battle of wills that pits ultimate loyalty against unbridled lust.

SWEET RUIN clashed with the other installments in this series; it had a different writing style, and given how far along the IMMORTALS AFTER DARK plot arc is, I thought that it was a little late for Kresley Cole to be rolling out two new characters. Josephine is Thaddeus’ sister, and there was a strong connection to the Valkyries, but other than that this was mostly a transition novel.

I liked Jo. She fit the IAD female lead profile perfectly, and therein was the problem. Other than having a different name, and being a vampire crossed with a not-yet-seen supe type, I found that her voice was extremely similar to many of those that came before her. On the flip side, Rune was a shameless man-whore, and bats for Team Morior which made reading his POV compelling because it muddied the good/evil waters.

This was one of the more sexually supercharged titles thus far which significantly changed the tone of the story, and I personally don’t stray into the erotica side of Paranormal Romance, so I wasn’t thrilled about that. Nix had her usual moment in the sun, although it was significantly larger (YAY!), and set some fascinating wheels in motion. Ooh, and I think Cole dropped a hint about the soothsayer’s HEA.

Audiobook listeners have been blessed with samples of Robert Petkoff’s Texan accent ever since Thad showed up; however this was the first time that we got to enjoy the full extent of it via an MC. The narrator also did a sensational job with Rune, and adroitly adjusted to the author’s format change. If previous installments left you blushing, wait until you hear his latest performance!

I had mixed feelings about SWEET RUIN, but still, I regret nothing!