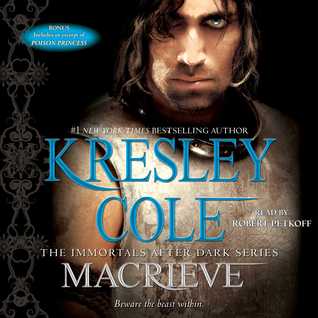 A BEAST IN TORMENT
Uilleam MacRieve believed he’d laid to rest the ghosts of his boyhood. But when a brutal torture revives those ancient agonies and destroys his Lykae instinct, the proud Scot craves the oblivion of death. Until he finds her—a young human so full of spirit and courage that she pulls him back from the brink.

A BEAUTY IN CHAINS
Seized for the auction block, Chloe Todd is forced to enter a terrifying new world of monsters and lore as a bound slave. When offered up to creatures of the dark, she fears she won’t last the night. Until she’s claimed by him—a wicked immortal with heartbreaking eyes, whose touch sets her blood on fire.

A FULL MOON ON THE RISE
With enemies circling, MacRieve spirits Chloe away to the isolated Highland keep of his youth. But once he takes her to his bed, his sensual mate becomes something more than human, evoking his savage past and testing his sanity. On the cusp of the full moon, can he conquer his worst nightmare to save Chloe…from himself?

MACRIEVE had all of the usual components that come standard with every IMMORTALS AFTER DARK installment, but it didn’t push the envelope like some of the other volumes have which made it kinda ordinary. I haven’t formed much of a connection with the hero over the course of this series, so I didn’t have a vested interest in his story going in, and Chloe is a stand-up gal and all, although I did find her too agreeable at times.

In this book Kresley Cole expands upon a supe that has yet to take center stage in this series, and normally I’d put a spoiler alert here as it’s not mentioned in the blurb; however I’m a late arrival to this world, and therefore the last to know. Anyway, the author did a sweet job of breathing life—or perhaps more aptly put, sex—into her succubi. Her IAD vision never ceases to amaze!

I enjoyed learning more the events that have shaped MacRieve, and as usual the interconnectivity between the novels; however I did find that the latter was to a lesser extent than normal which was somewhat disappointing. I also wasn’t a huge fan of the ending; Cole hasn’t left us in limbo much, so I’m bummed that the next volume isn’t about you-know-who after that cliffhanger!

Robert Petkoff didn’t really have to reinvent the wheel in this installment, but his sexy Scotish werewolf voices will never get old, and he conveyed Chloe’s boundless energy very well. There were also a number of never-before-seen secondaries that he had to drum up one-of-a-kind narration for which he of course did with ease, and Nix’s cameos continue to be personal favourites.

MACRIEVE, despite being about an alpha, was a middle of the pack audiobook.