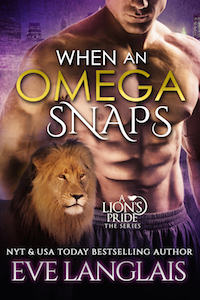 Leo is the calm guy. The nice guy. The one nobody screws with. So could someone explain that to Meena so she stops driving him insane—with desire.

When Meena literally throws herself at Leo and declares he’s her mate, his first reaction is to deny—and run far, far away. This lion/tiger mix doesn’t do drama and chaos. Problem is, once he sets eyes on her, he can’t help but want the vivacious blonde with plus-sized curves, perfect for a big man like himself.

Thing is, someone else wants her too.

This poor omega is about to have his world turned upside down, which means everyone better watch out because when Leo experiences love, jealousy, and frustration for the first time, he doesn’t just snap—he roars!

Leo’s job is to keep the peace. He likes he rules and he likes to enforce them. He isn’t what you think of when you think of “omega”. He is tough as nails and big. He is a liger. His father was a lion and his mother was a tiger, which makes him the largest of the cat species. But that doesn’t make the stick up his butt any smaller. He isn’t know for his fun. Needless to say when Meena is brought to the pack to hide, things are thrown into chaos.

Meena had been thrown out of the pack and banned, but with Arik now running the pack, things have changed. He has allowed her to come back while “some kind of calamity blows over in her hometown”. Basically a Russian mobster tiger wants her for his wife, willing or not. Meena is a very large woman and he wants that large size to be the mother of his children so that he can have large babies.

Meena is everything Leo is not. She is a walking disaster. One, she is very clumsy. Two, she also has no sense for rules. She was banned for a “few silly misunderstandings.” For example, “Explode one carved pumpkin and people lose their minds. I see the lobby got repainted, no permanent harm done.”

Once again, Meena and the other lioness are the life of the party in this story. Watching Leo come around to loving Meena is fun. This story had me chuckling several times. We also get to meet Dimitri, the Russian mobster, who is the hero of the next book and Teena, Meena’s identical twin sister. This story should be interesting.

“Resistance is futile. But cute.”

“Sure thing, Pookie.”
“And stop calling me Pookie.”
“Would you prefer Snookums?”
“No!”

20 responses to “Review: When an Omega Snaps by Eve Langlais (@mlsimmons, @EveLanglais)”