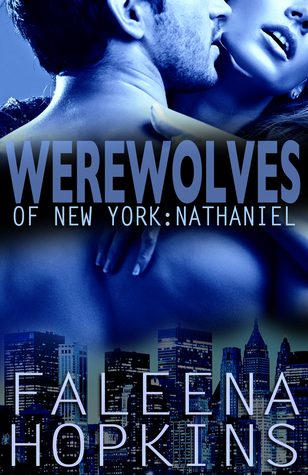 Michelle Nero is a smart, savvy, curvy brunette...and a very loyal friend. After she's embarrassed herself in front of the most handsome man she'd ever seen, she leaves to tuck her drunken friend Rose into bed. Walking home in the dark, deserted streets of Downtown Manhattan an unsavory villain throws her into the shadows. But something scarier comes to save her. She doesn’t know who…or what. She’s too busy doing what he commanded her to do. RUN.

Nathaniel Jacobs went to the club looking for something superficial. When he locks eyes with a pretty brunette, something clicks inside him that’s anything but temporary. He follows her only to find her being attacked. No one must know werewolves exist, but Nathaniel has to save her by any means necessary. Only...once he finds himself falling for the human female – he and his packmates must decide, can they trust her with their secret?

Reading these books in the wrong order really didn’t matter to my enjoyment of these books. I recently reviewed the third in this series, Darik, and liked it well enough that I went back and continued with this book, first in this series.

Michelle Nero is out at a club to celebrate her best friend, Rose’s birthday. While trying to deal with her drunk friend, she sees the best looking man she has ever seen in her life. But she has to leave with her friend, and once she leaves her friend’s apartment, she ends up having to walk home and is attacked. After the attack, someone she doesn’t see saves her, and she runs for her life-leaving her purse(and ID) behind. When she finds out that the would be rapist has been savagely killed by a wolf, she is pretty shocked. Nathaniel, a werewolf, had no idea when he went out that night that he was going to find his mate. Knowing this, he follows her to her friend’s apartment-which was an interesting way to meet a mate to say the least!

I enjoyed Michelle as the main character of this book. But Nathaniel, and the other members of his pack are great characters. I really liked them in Darik’s book, and in this book they were all just as fun, and a reason for what humor there is in this book, especially on Eli and Darik’s part. Central Park is one of their hangouts and where they have saved people from robberies and attacks many times in the past. Nathaniel killing the would be rapist was different, so they all know he feels differently towards Michelle.

This book was well written, however I did have a couple of problems with parts of the story. I know that insta-love is the norm for werewolves and it normally doesn’t bother me. But this one was probably the most extreme that I have read-and it made that part of the read a bit unbelievable for me. The other problem was how easily Michelle deals with Nathaniel being a werewolf. Over an above those two things, I did enjoy the book, especially the characters. It was a fast read at less than a day, and kept my interest. I have every intention of reading the next one in the series, Eli. I think Eli is my favorite of the pack so far, with Darik, a close second.