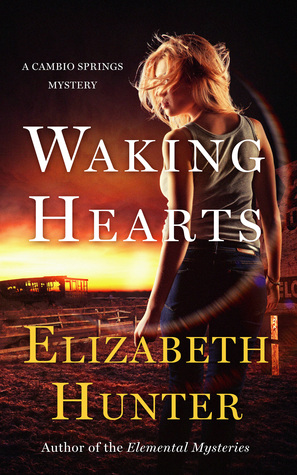 When everything you’ve longed for is standing right in front of you, would you find the courage to chase it when you’ve given up on dreams?

Fox shifter Alison Smith gave up on happy endings when her ex-husband walked out, but that didn’t mean she was allowed to give up on happiness. With four growing kids, Allie is determined to look on the bright side and carry on, even when life seems to keep kicking the girl who’s fallen down.

Four kids, two jobs, and a pile of debt left over from her ex seem overwhelming most days. Luckily, Allie has the best friends a girl could ask for. Especially a certain quiet bear who’s always been her rock.

Patient. Oliver Campbell knows what it means to be patient. But twenty years of wanting one unavailable woman may have pushed him to the edge. With Allie working every night at his bar, their friendship has begun to fracture.

Then old ghosts offer one more kick to the little family that’s already down, and patience is a virtue Ollie can no longer afford. Allie’s ex-husband may be gone, but his actions are haunting his family. With danger licking the borders of Cambio Springs, the bear and the fox will have to work together. And twenty years of unspoken truths may finally come to light.


FINE. I admit it. As much as I love Elizabeth Hunter’s ELEMENTAL series, I think I love CAMBIO SPRINGS more.

B/c shifters vs. vampires.

And Cambio Springs, California is full to bursting of shifters. In SHIFTING DREAMS, we met Jena Crowe and the people who occupied her world. In DESERT BOUND, we observed the tumultuous courtship of Teodora (Ted) Vasquez and Alex McCann.

But we also watched Oliver Campbell silently bury his feelings (as he’s done for the last twenty years) for Allie Smith as she struggled to take care of her four children while her fifteen year marriage to (assclown) Joe circled the drain.

And as painful—especially, in the glow of Ted and Alex’s newfound happiness—as it was to watch Allie’s life finish its decent into chaos when Joe (assclown that he is) finally walked out on his family, a flame of hope was kindled.

A hope that was realized in WAKING HEARTS. *flails*

Me: I liked the relationship development in this one more than the others. BUT. There was a major shift in the story arc, and Bad Guy felt like a placeholder used to introduce Big Bad (HA!) Guy.

He was blandly nefarious, and, like his appearance, wholly forgettable. But I’m hopeful the new development is a sign of at least several more installments. *crosses fingers*

On to the good stuff!

It’s been about a year since Assclown Joe left, and Allie is struggling. Not only did he leave her to raise their four children by herself, but soon after his departure, Allie discovered they were 60k in credit card debt, mostly from a gambling habit he’d kept hidden.

So she’s working two jobs, barely scraping by, exhausted . . . lonely . . . stressed . . . She’s near her limit when she receives the news that a body was found in the desert outside of Vegas, and based on the pawn shop receipt found in a jeans pocket (for an heirloom bowie knife that belonged to their oldest son), authorities believe it’s Assclown Joe.

And this is one of my favorite parts—we knew Ollie was in love with Allie based on what we saw in DESERT BOUND, but what about Allie? As unhappily married as she was, she wasn’t the type to stray. She obviously valued his friendship, but beyond that . . .?

*is merciless* Read it and find out.

SIDE NOTE: how perfect is Ollie as the name of a bear shifter?

Ollie is my favorite type of Alpha Male, and this type, for unfathomable reasons, is the most rare: the Good Guy Alpha.

The Good Guy Alpha has all the basic traits of an alpha—the overwhelming maleness, the protectiveness, the loyalty, the aggression—but he’s also kind, patient, intuitive, and GOOD.

And 110% SAFE. Which may sound boring, but absolutely is not (b/c ALPHA), and it’s also exactly what Allie needs.

And just like last time, Hunter stealthily built the foundation for what will come next, leaving us ravening for CAMBIO SPRINGS #4. *waves at Sean* *stares hoping for a flash of FANG*

SO. Climb on board the Hunter train, destination Cambio Springs. Like men in uniform? Shifting Dreams is the book for you! Ruthless businessmen? Desert Bound has your name on it. Tattooed bar owners as intimidating as they are ALL THE GOOD THINGS? You, my friend, will love Waking Hearts. Tickets are more than affordable (b/c independently published), so what are you waiting for? Highly recommended.