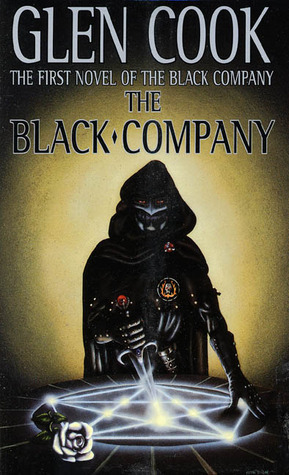 Some feel the Lady, newly risen from centuries in thrall, stands between humankind and evil. Some feel she is evil itself. The hard-bitten men of the Black Company take their pay and do what they must, burying their doubts with their dead.

Until the prophesy: The White Rose has been reborn, somewhere, to embody good once more. There must be a way for the Black Company to find her...

I went into the reading of THE BLACK COMPANY by Glen Cook nearly blind. I knew a lot of people didn’t like it. I knew it wasn’t going to be warm and fuzzy.

But that was pretty much it.

I quickly learned that despite Joe Abercrombie being widely known as “Lord Grimdark,” it was Cook who gave birth to the subgenre.

So that’s important to know: it it grim, and it is dark.

But it’s also about brotherhood, about family. It’s about upholding some version of a moral code in the midst of your own depravity. And it’s surprisingly funny—I buddy read this with a bunch of friends on Goodreads, and after various similar incidents, I suggested the BR’s catchphrase should be, “Shock, horror, and hilarity.”

The story is told from the POV of the Company physician, a man named Croaker. He’s also the annalist, the Company historian, and it doesn’t take long to determine he’s perfectly suited to the task.

Croaker is . . . curious. So curious that he borders on being nosy, but he’s not a gossip, and his good-natured need to unravel mysteries keeps him likable rather than obnoxious. He’s one of my favorite characters.

Likable as he may be—as any of the Company may be—they are not the Good Guys.

They’re sellswords, the archetypal mercenaries, they fight for coin, not for cause, and while Croaker admits to not recording every foul deed in which the Company partakes, he records enough that you never confuse them with heroes.

The Black Company enthusiastically engages in the spoils of war and all that entails, so consider this your warning if anything that falls under that umbrella is one of your triggers. This kind of thing is always unpleasant, but as I’ve mentioned before, I give a lot of it a pass when it happens in fantasy b/c realism.

They do have their own version of a code, and unless it threatens the Company as a whole, they follow it to the best of their ability.

Unfortunately, that code doesn’t preclude working for the Bad Guys. B/c according to Company philosophy, there are no “Bad Guys,” and similarly:

“Evil is relative . . . You can’t hang a sign on it. You can’t touch it or taste it or cut it with a sword. Evil depends on where you are standing, pointing your indicting finger.

BUT. Croaker becomes less and less convinced of this as the story progresses. As more and more people become victims in the power struggles of their “betters.”

And by victim, I mean DEAD. As a doornail. Numbering in the tens of thousands. B/c WAR.

The only real problem I had was an infrequent lack of clarity.

I don’t expect to know ALL THE THINGS in the first installment of a long-running fantasy series, but the things I don’t know need to be tangibly shrouded in mystery. You can’t make incomprehensible statements in a way that looks like you’re supposed to know what they’re talking about, when in reality you’re not.

Beyond that, I loved THE BLACK COMPANY by Glen Cook. One of the wonderful things about fantasy, is that it ages well, and whether it’s traditional good vs. evil fantasy or more nebulous what is good or evil fantasy, the elements are timeless—there’s a reason this one is still making the rounds nearly 25 years after it was originally published, and that reason is EPIC. Highly recommended.

The Chronicles of the Black Company:

4 responses to “Review: The Black Company by Glen Cook (@jessicadhaluska)”